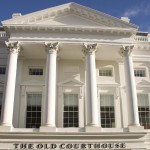 The project, named installation of the year by the KNX (UK) Association, was designed by systems integrator Building Evolution. According to managing director Nigel Stafford, KNX was chosen because it is an open standard and for the full functionality that it offers.

The Old Courthouse is a registered (listed) building built in 1841 but its steel and glass interior is completely up to date. It was originally the meeting place of the Oddfellows, a charitable guild organisation, and became the island’s courthouse from 1860 until 1996 when the courts moved to a new £11 million building. HLA’s design retained two of the Old Courthouse’s facades behind which is a completely new structure with 28,000 square feet (2600m²) of office space over three floors, plus a restaurant and club over two floors, basement-level parking and a roof terrace. An adjoining townhouse that had been used as a police station was replaced to create a new entrance with a glazed facade, and a new, contemporary rear facade, based on the proportions of the original, was also added.

Jung KNX devices were chosen partly to match the high specification finish of the office interiors but also as a way of future-proofing them. Jung equipment includes stylish stainless steel walls switches and touch panel controls along with movement detectors and switching actuators. More significantly, Jung KNX devices can be integrated with compatible devices from other manufacturers. KNX conforms to ISO/IEC 14543 and is a worldwide standard for home and building control. Instead of tying users into proprietary systems, KNX allows them to link compatible devices from a variety of suppliers.

“By installing Jung KNX at the base fit-out stage we built in flexibility for the later tenant fit-out when tenants wanted to create new office layouts,” says Nigel Stafford. “But it takes time for some tenants to acclimatise to a new building. Sometimes they want to make changes after they have been in for a while, especially when they realise what the system can actually do. All we have to do is add any extra device if required onto the bus cable, followed by a quick bit of reprogramming and it’s done. And if they want to change it again in five years time that will still be just as easy. The Old Courthouse is a high-profile building but in the future, as with many other technologies that we now take for granted, tenants are going to come to expect this level of flexibility and control as standard.”

At the Old Courthouse, Building Evolution linked a variety of Jung KNX components with interfaces to Daikin HVAC, a Trend ventilation system and Durable Technologies’ DLC1000 lighting controllers, to create a single, programmable system. Jung KNX systems throughout the building are linked using dedicated local area networks, and a Daikin BACnet gateway along with an Intesis KNX BACnet/IP client device provides the interface with the Daikin Variable Refrigerant Volume HVAC.

The physical medium on each office floor is through KNX twisted-pair cable. The KNX bus uses less cabling than conventional wiring and is easier to install and maintain. With the Jung KNX system it is possible to add or remove devices or change the logic of the network – to make lighting respond to daylight levels rather than a timer, for example, by altering the programming, rather than having to rewire. At the Old Courthouse, the bus is mainly housed in Wieland gesis NRG seven-core flat cabling which also carries the three-phase power for lighting, HVAC and office equipment. This was installed in the ceiling grid so that it would be available throughout the building as the office space was divided into smaller areas. The cabling uses a simple system of clamp connectors that also allowed the plug and play installation of the lighting controllers. These have switched mode power supplies that eliminate heavy transformers, reducing power consumption and heat.

Between floors, Jung KNX/IP Routers were used to convert KNX data to KNX over IP (internet protocol) running over a dedicated LAN. The KNX IP/Routers allow only the necessary data traffic to go between floors and therefore minimises the overall data traffic on each floor. Use of KNX/IP also meant that data could go directly to Jung’s Facility Pilot PC software which is used at the Old Courthouse to monitor and control lighting, the Daikin system, ventilation and fire alarms, and to log individual tenants’ energy use.

The Jung Facility Pilot visualisation module provides graphic information such as the operating condition of the lighting, including lamp failures. The graphics are presented in a similar way to web pages and use icons designed to make information easy to view at a glance. The software is modular so that users can choose the level and types of information that suit their installation. At the Old Courthouse, ABB three and single-phase meters with KNX interface modules provide the landlord with electricity meter readings for each tenant for billing purposes. Facility Pilot can also be used to provide 365 day timer programmes for the landlord’s own lighting and electric heaters.

At base build, on each of the three main office levels, a Jung FP701 Touch Panel provided the ability to control HVAC and lights. At the later tenant fit-out stage, tenants were also able to decide how they wished to control their lighting and HVAC in their newly created offices. Here push buttons and movement/presence detection controls were also added for specific lighting and heating requirements. In some cases tenants chose to include two-channel presence detection for lighting and HVAC that switches HVAC from the comfort setpoint to energy-efficiency levels when the offices are unoccupied. Absence detection, which utilises light switches with presence detectors, has also been used by some tenants to prevent lights being left on.

Integrating building services with KNX has advantages at all stages of the building’s life and to all the stakeholders, says Nigel Stafford. “During the construction phase less cabling is used, installation is made simpler and quicker, and alterations and additions can be made more easily. The tenants also know they can make changes without a lot of work. There is increased energy efficiency and savings for the people paying the bills and there is greater comfort and well-being for the people living and working in the building. The owners also know they have a building that can meet any changing demands on the building over its lifespan.

“It’s very important to look at the long term sustainability of a building. KNX is being more widely accepted, rightly, for high-profile projects like the Old Courthouse. Because it is an open standard and not tied to one manufacturer there’s a much greater chance of it being there in 30 years time, when it will still be backward compatible. There are buildings all over the country with systems that are less than 10 or 15 years old that are no longer supported, but with an open system this is not an issue.”