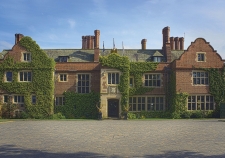 BMS and process control technology from Priva is helping one of the UK’s top-ranking independent boarding/day schools to improve the efficiency and monitoring of its recently installed boiler house. Priva’s Blue ID system has been installed by CambridgeHOK as part of a project that builds on a legacy of Priva technology at Queen Ethelburga’s Collegiate near York.

Queen Ethelburga’s Collegiate is an independent boarding and day school for girls and boys from 2 months to 19 years old. Located in Thorpe Underwood, northwest of York, the school first opened in 1912. Today, Queen Ethelburga’s comprises four individual schools across its campus, as well as a kindergarten. The senior school has been co-educational since 1999 and draws pupils from over 50 countries.

System overhaul
With over 100 years of history and a substantial capital investment programme across the 200 acre Estate, changes to the fabric and infrastructure of the buildings at Queen Ethelburga’s are, from time to time, inevitable, particularly when it comes to essential provisions such as heating and water services. CambridgeHOK, a long-time Priva partner and installer, was first invited to Queen Ethelburga’s Collegiate to devise a system capable of controlling the school’s onsite sewage treatment systems.

“As the school is in a fairly remote location it handles its own sewage treatment and purifies its own water,” explains Duncan Grant, project lead at Cambridge-HOK. Following the successful installation of a Priva system, the facilities manager asked what else the Priva technology could do for the school. “One major problem identified early on was that the school originally had multiple, smaller boiler houses across the campus that had to be individually monitored and maintained.”

Mr Grant started by scrutinising the school’s existing control systems from a diverse assembly of different manufacturers and, over time, replaced everything with Priva technology. This early stage of work brought six buildings and localised boiler houses under the control of Priva solutions.

“As several Priva systems were already in place to control the many school and residential buildings on site, we developed bespoke software programs to link the existing systems to the new control panel,” says Mr Grant. “This means that all Priva systems on site can communicate effectively, passing on the heating and hot water demands of the campus to the new boiler house.”

The new central system represents a much easier solution for such a large site with many different heating demands. Moreover, the newly programmed Priva system ensures that it will be much simpler for campus staff to ensure everything functions to the highest standard.

Process control
An important part of the technology’s process control capability is protecting against legionella. Here, the Priva technology runs the hot water tanks to 65°C and holds if for a prescribed time before distribution. Legionella bacteria multiply when temperatures are between 20-45°C and nutrients are available. However, the bacteria do not survive above 60°C.

The Priva equipment also monitors the levels in eight underground tanks that hold fuel for the boilers and red diesel for other on-site uses.

“Priva Compri HX not only checks and reports on fuel levels, it controls fuel dispensing, too,” says Mr Grant. “Once again this highlights the process control capabilities of the Priva equipment.”

The latest technology
The most recent panels that Cambridge HOK has delivered leverage the benefits of the latest Priva platform, Blue ID. This technology brings the two phases of the project together.

“Thanks to the cloud connector, we can interface with the Priva BMS system and allow access by laptop remotely, which makes life far easier for the maintenance and estate staff,” concludes Mr Grant.

Priva Blue ID is a cost-effective and modular BEMS that is flexible and easy to use. The hardware consists of a base on which individual functional modules, containing all mission-critical components, can be installed. Wiring takes place on the base, which is robust and insensitive to failures.