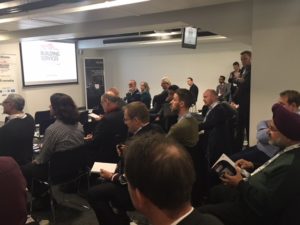 The first Building Services Forum delved into wide ranging topics from energy management and utilities legislation to low carbon plant rooms, control systems and internet based connections, data analytics and the role of data in managing buildings, the challenges of BIM, wellbeing of occupants and protecting against cyber attacks. Debbie Eales reports.

Delegates at the inaugural Building Services Forum (The Building Centre, London, on February 8), left with plenty of food for thought following nine CPD-accredited seminars that tackled some of the biggest issues facing our sector. 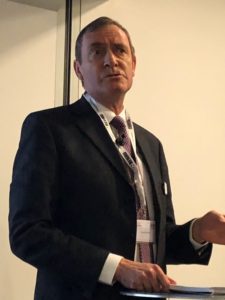 Mr Beattie said: “The event was a great opportunity to both examine current challenges but also to take time to consider some of the opportunities that emerging developments such as the IoT will bring for our sector. Speakers and audience alike were overwhelmingly positive about the need for us all to stay alert to the pace of change.”

Jacqui Henderson, Business Director for event organiser, Datateam Business Media, said: “The aim of the event was top provide a platform for innovation and debate which would play a role in shaping the future of building services and feedback from delegates suggests we did just that.

“We have already booked the venue for next year and I look forward to announcing details about more regional events in the near future. I’d like to thank our sponsors, exhibitors and you, the delegates, for supporting our first ever Forum.”

Mr Hefford described CHP as “a small power station, but more than twice as efficient”, allowing business to produce electricity at gas prices. Low NOx emissions are another benefit.

He then spoke about the drivers for CHP, which included the government’s Non-Domestic Building Services Compliance Guide and predicted gas and electricity prices.

However, trying to comply with Building Regulations can lead to oversizing, which results in frequent “stop starts”, undoing the benefits of CHP, Mr Hefford cautioned.

“Will CHP deliver savings?” Mr Hefford asked. “It’s all down to the correct sizing.”

He offered 10 rules to maximise efficiency saying that to make CHP financially viable, it needed run throughout the year.

North Building Technologies’ James Palmer (pictured) looked at the problems facing building controls technology as the Internet of Things (IoT) becomes more prominent. “Where we are going is taking the hardware away and pushing it up into the Edge – into the cloud,” said Mr Palmer. The ‘Edge’ describes processing power at the edge of a network, rather than in the cloud. 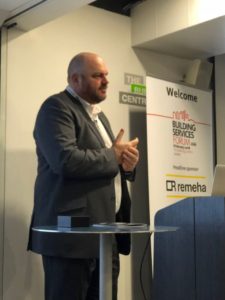 Said Mr Palmer: “To get the real benefits of the IoT and cloud computing, you need to push as much power as is safe into the cloud. As much as North currently sells hardware to deliver control and integration into buildings, that hardware is purely a delivery mechanism for our software. That software can just as easily exist in the cloud as in a black box like Commander. Once that control is in the cloud, some very real benefits come to light.

“IT skills will be crucial, particularly around IT security. And there will be practical issues, like getting internet access in the plant room early enough in the project for us to all start working,” he continued.

“The IoT isn’t a magic bullet for integration. But there is no doubt in my mind that within 10 years, control systems will be cloud based, rather than site based.”

Integration is the key

Schneider Electric’s IoT Services Director, Mike Hicks (pictured), explored how BMS can future-proof your investments, with a look at trends that are shaping the future of buildings, from big data to open protocols. He told delegates that buildings currently use 42% of the world’s energy and that this demand will increase 50% by 2050.

“The growth of data, information and devices is certainly one of the causes of the growing demand for energy in buildings,” he said. But trends – such as urbanisation and the 24/7 multi-use nature of buildings – is also driving up energy demand. By 2040, electricity consumption in buildings will grow by 80 percent. As we move towards the future, our buildings will need to be efficient, productive and sustainable.”

“By focusing on data inter-usability, this integrated solution brings buildings to ‘life’ by providing it with the intelligence required to take independent decisions on comfort, efficiency and maintenance.”

More than 100 organisations have now adopted “wellbeing” into their strategies to improve employee engagement and business culture, she said.

“Wellbeing is not a simple unipolar dimension but is composed of at least four different aspects into wellbeing, each capturing different elements of our life – physical, psychological, social and environmental.

“All these factors affect people’s thoughts and feelings about the quality or goodness of their lives, their overall life satisfaction or sometimes how happy they are with their lives or how stressed they are.”

BSRIA is introducing a new Building MOT, which identifies 80 markers in buildings that contribute to wellbeing.

Dr Aga-Hossein said that current methodologies are expensive and complicated to achieve and retain and that there is a need in the industry for a new methodology that building managers could directly use to manage and improve their buildings.

Legislation – what to consider 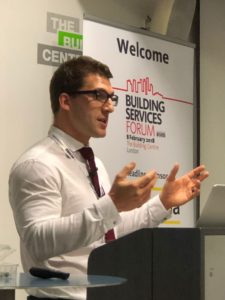 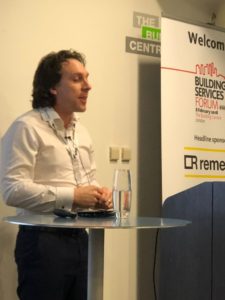 Cyber attacks are no longer the narrative of fiction, they are happening now, said the ECA’s Head of Technical, Steve Martin (pictured), who looked at the weak points in systems on the back of more and more connected technology in buildings.

An ECA survey revealed that just 39% of those questioned had taken steps to protect against a cyber attack. “Some of them naively think ‘it’s not going to happen to me’,” he added.

Mr Martin said that no one was immune, highlighting a cyber attack on Google’s Sydney office building management system – the result of just one missing patch.

According to the Department of Culture, Media & Sport, 69% of businesses say that cyber security is a high priority for senior managers but only 51% of the companies spoken to had taken recommended actions to identify the cyber risk and only 29% had a formal, written cyber security policy. Worse, just 10% had a formal incident management plan.

Mr Martin outlined the risks of doing nothing. In addition to the financial and reputational risks – and loss of information – building systems could go down, resulting in safety and operational problems.

The government’s National Cyber Security Centre is a useful point of information, he said. He also mentioned Cyber Essentials, a government backed scheme which is “there to show your customers that you are taking cyber security seriously”.

Carlo Gavazzi’s Mark Rimell advised on the steps that can be taken to implement an effective energy management system. He covered design, installation, commissioning and system integration.

The key requirements of the system design are:

Provide this information, in a user-friendly format, to whoever needs it, in order to:

– Take account of renewable energy systems by measuring their performance.

Consuming less energy is about getting the technology and strategy right. When this is understood, a building’s performance can be improved and energy usage reduce. These actions will reduce energy expenditure and carbon footprint, he said.

Andy Mills, Business Development Manager at Priva UK, said he aimed to demonstrate how modern cloud based BMS solutions deliver more value during a building’s operational lifecycle than ever before.

He explored analytical and visualisation tools that encourage cooperation between clients and service providers to improve building performance.

Technology made available through cloud based solutions helps making maintenance more targeted and effective and transparent for the client, said Mr Mills.

He went on to discuss common situations which reduce the performance of buildings – for example, the addition of partition walls. He also discussed sustainable maintenance and said that the emphasis must be on improving installations earlier – which would lead to improved results.

A more intelligent approach to pipework

Vijay Srikandarajah, a CIBSE Level 5 Low Carbon Energy Assessor at Loughborough University, explored BIM in relation to pipework – the subject of a collaboration between BISPA, Tata Steel and the university.

Describing BIM as a “new, but disruptive way of working”, Mr Srikandarajah said that there was currently a poor awareness of the installation issues with pipework.

Problems included the wrong standards being used, the wrong tube sizing, ignoring how joints work and other fittings being ignored.

“There is a poor understanding of flow, heat, pressure and service life conditions, such as erosion,” he added. “BIM does not really show what’s going on in the pipework system. Key parameters such as heat transfer, pressure and flow and corrosion, all affect the performance of the pipes.”

Lab studies, simulating real life scenarios such as sludge, that can affect performance in the pipe, are not shown in BIM, he added.

It requires a new approach, said Mr Srikandarajah – and virtual reality is one tool that will allow more detail to be seen.

The BISPA research objectives at Loughborough have involved creating VR models of Tata Steel pipe rigs which can be used for training and visualisation benefit.

Such models will help to reduce the risk at the start of the project and allow installers to predict performance. 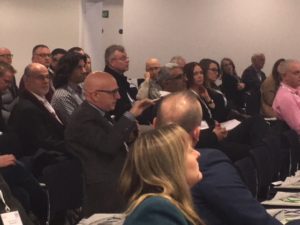 Feedback from delegates and exhibitors attending the inaugural Building Services Forum has been positive.

Barry Pinder, a BEMS engineer at Imperial College, London, said he attended the event to give manufacturers and service providers some insight into what he needs from a building management system.

“What I want is standardisation of BMS strategy, together with more useful user interfaces – they can often be over complicated – and better data analytics.

“I’m looking for technology that closes the loop, almost like artificial intelligence, something that does everything without the maintenance team having to go back to the plant.”

Commenting on the engineering gap he says it’s the “remedial, reactive and corrective actions” that are currently missing.

Peter Wasmuth, who works in asset management at Network Rail, said: “All of the subjects were very interesting and while some of the content was about reminding us of what is already out there, it’s important that it does that, because we need reminding!

“There is always a gap between what can be done and what needs to be developed; products take between one and five years to get to market so we have to keep communicating and sharing ideas between different industries, to get the products we want.”

Gill Hewart, a consultant at Opeque said: “I particularly enjoyed the talk about cyber security – it made me think very differently about how we manage BMS; it was certainly useful for raising awareness.”

Exhibitor and speaker James Palmer, Business Development Manager at North Building Technologies, said the day had been “well attended, with some really good people. I think we are all talking about the same thing, which is great. It means we are all going in the right direction.”