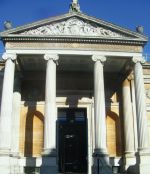 The lighting within the world famous Ashmolean Museum, now re-opened after a major multi-million pound redevelopment, is being controlled by KNX intelligent building technology. The installation was designed and supplied by KNX UK member, Andromeda Telematics and offers energy savings, flexibility for future changes and the automated testing of a public building out of hours.  With the specification of a powerful graphical head end display which shows the real time status of all lighting throughout the museum, the potential energy savings for lighting and the use of natural daylight are maximised.

KNX was specified by the consulting engineers to achieve the complicated lighting control strategies required. KNX also offers the facility for limitless expansion and the ability to specify and seamlessly integrate the most appropriate KNX compliant products from many different manufacturers. The building includes 39 new galleries, staircases, entrances, bridges, walkways and a café within which the lighting is controlled via KNX. In addition, lighting in back of house areas including offices, laboratories, toilets and the boardroom are also managed with KNX.

Across the six levels in the public areas there are 18 lighting control panel locations to match the electrical distribution zones. Each panel houses a variety of equipment to meet the requirements of the project’s lighting designers and emergency lighting for each area.

The galleries mainly consist of around 500 switched circuits for ceiling mounted track lighting, feature lighting and display cases. These are switched using 16A C-load actuators and the track circuits are monitored for mains failure.  In the event of a local circuit failure, the emergency lighting within the immediate area is activated instantly.

The galleries also benefit from local control switches for out of time schedule operation and in selected areas occupancy detectors are used to reduce lighting loads.  The two main public staircases have concealed cold cathode lighting detail that is controlled via scene selection and daylight linking to make the most of the considerable natural light gains.

An internal lux sensor provides accurate measurement to allow the dimmer units to control accordingly. Both these staircases have large areas of glass that generally provide good levels of natural lighting. However, due to the sensitive nature of the artefacts, direct sunlight has to be restricted. Therefore a sun tracking model closes the blinds when the external lux levels are high and the position of the sun makes direct sunlight an issue.

The non-public spaces are fitted with occupancy detection and dimming control benefiting again from DALI lighting and providing energy savings. As with the emergency lighting in public areas, this also provides the ability to monitor the lighting in real time for lamp or ballast failures.

During the scheduled emergency light testing intervals, a report is generated for any inverter, battery or lamp failures on all the self-contained fittings. The KNX/DALI gateway provides the high level functionality that the system demanded.

KSLD were the specialist lighting designers for the project and involved in lighting the front of house areas including the exhibition galleries, two main stair atria and adjacent ancillary areas. The lighting control system was specified by Atelier Ten.

“We have found the KNX system particularly useful for daylight linking at the main atrium, plus for the time clock control across the various zones. The ability to isolate wall switches during the day has also been important as the museum had problems with members of the public ‘playing’ with the switches during opening hours and upsetting the exhibition lighting. These are now deactivated during opening hours through the control system.” says Hannah Neufeld, Senior Lighting Designer, KSLD.