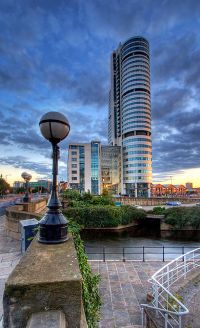 A recent survey of the Trend building energy management system and the plant it controls at Bridgewater Place, Leeds, is expected to lead to significant energy savings in what is Yorkshire’s tallest building. The audit was conducted by Trend at the request of the site’s property managers Jones Lang LaSalle and involved close collaboration with the building’s M&E maintenance provider Norland Managed Services. The £3500 cost of carrying it out was recouped in a matter of weeks as a result of system changes made during the audit itself. The latter also identified a further £35,700/yr of savings that could be achieved through additional investment in the BEMS, which is now going ahead.

Dubbed the ‘Dalek’ by critics of its distinctive architecture, Bridgewater Place stands 32-storeys (110m) high and dominates the Leeds city centre skyline. Completed in 2007, it is a mixed-use development comprising some 23,000m2 of commercial office accommodation, 200 luxury apartments and 1400m2 of retail space at ground level. The apartments occupy the building’s upper 22 storeys; the offices are spread over three wings that are connected by an 8-storey glass atrium.

Each office wing is served by a main air handler with heat recuperation and there are some 650 fan coil units providing local air conditioning. Three condensing boilers supply the plant with low pressure hot water, with chilled water requirements being met by four water-cooled chillers. Control and monitoring of the commercial area’s HVAC services are performed by a Trend BEMS comprising 7 IQ3xcite controllers on the main plant and a dedicated IQL controller on each fan coil unit. All the IQs are network-linked and the main point of system access is a Trend 963 supervisor.

Norland Managed Services, who took over responsibility for maintaining the HVAC plant and BEMS earlier this year, felt there was considerable scope to save energy through optimisation of the controls. They and Trend thus approached Jonathan Ward, Jones Lang LaSalle’s recently appointed Facilities Manager at Bridgewater Place, and proposed an energy audit. Mr Ward has considerable experience of BEMS and, seeing the potential benefits to the building’s commercial tenants, quickly gave the green light.

The Trend engineer who conducted the audit spent three days on site reviewing the operation and control of the HVAC plant. Importantly, his first task was to talk to Mr Ward and the on-site maintenance engineer from Norland. These discussions were crucial as they enabled him to gain a better understanding of the building and the issues relating to its services.

Before leaving site the engineer made a number of changes to system control settings and strategy. One of these involved resetting the building occupation times, which govern when the air conditioning is turned on and off. These times were reduced in all 25 office ‘zones’ – typically by 3hrs/day – to more accurately reflect actual occupancy. This change, together with the introduction of optimum start/stop control in every zone, has reduced unnecessary running of the air handlers and fan coil units. In addition, the boilers and chillers are now enabled for just 50hrs/week, not 67hrs as previously.

The boilers’ running hours have been further reduced by adjusting the outside air temperature economy setpoint, which if exceeded prevents them from operating. This was lowered from 24oC to 17oC. The supply air setpoint for all three AHUs was also trimmed back, from 19oC to 18oC, in order to increase the use of ‘free’ fresh air cooling and thereby cut the chilled water demand of the fan coil units. A final action taken at the time of the audit entailed implementing a simple staging strategy to stop there always being two chilled water pumps running irrespective of demand.

The audit also recommended a number of additional measures involving the installation of new hardware and some major reconfiguring of system control strategies. Jones Lang LaSalle has now confirmed its intention to have all of these implemented. The cost of doing so is put at £39,500 with payback being achieved in a little over a year – based on an estimated annual cut in gas and electricity consumption of 518,130kWh, equivalent to a saving of £35,700. The work is to be carried out in stages over a period of 15 months and orders for the first elements of the project have already been placed.

A large part of the savings will come from fitting variable speed drives on the air handlers’ supply and extract fans. Their speed will be controlled on the basis of occupancy – as indicated by CO2 sensors – and they will consequently no longer run flat out at all times. VSDs will also be installed on the chilled water pumps so their speed too can be matched to demand.

Control of the boilers and chillers will be changed so they are only enabled when there is a heating or cooling demand from the floors, whereas currently this happens whenever there is demand for ventilation. The boiler control strategy will be further modified to permit a lower return temperature setpoint during periods of low demand and thus allow the boilers to operate at high efficiency by condensing water out of the flue gases – as they are designed to do. The AHU control strategy is to be adapted to allow night purging of the building (using free cooling) when conditions are favourable, a routine that should cut the cooling system’s daily energy use by 20%.

Once all the proposed changes have been completed, the building’s commercial area could be using over 10% less energy than it was before the audit.

Yet as Jonathan Ward points out, lower energy consumption is not the whole story: “The building’s tenants will naturally gain from any fall in our energy spend. But they and we will also benefit from reduced wear and tear on the HVAC plant – and its longer life – as a consequence of it running less frequently. Since the building will have a smaller carbon footprint, there will be an environmental benefit too.”

In order to keep its BEMS operating effectively and maintain energy savings, Jones Lang LaSalle has invested in a Trend IQEye, an automatic monitoring and reporting package that continuously checks the system and highlights possible problems.