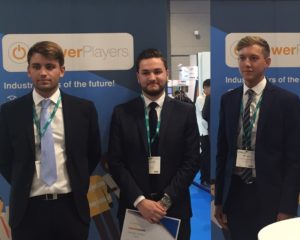 Two young and outstanding performers in the electrotechnical and engineering services industry have won the inaugural ‘Power Players’ initiative, following an announcement at the ED&I Expo in Birmingham yesterday (6 September).

26-year-old project manager Joseph Wu of T Clarke, and 24-year-old Charlie Harwood, a branch manager of CEF, won the most votes from a high quality field of four finalists. Joseph has been one of the project leads for T Clarke on a major development in Stratford, while Charlie became a CEF branch manager after producing some impressive sales figures.

Joseph and Charlie win a number of top prizes, including a networking trip to next October’s NECA conference in Philadelphia, lunch with business guru Sir John Parker, and participation in a once-in-a-lifetime fundraising trip next March to Arctic Finland with the Electrical Industries Charity.

Head judge and ECA Head of Technical Steve Martin commented: “Many congratulations to our winners and finalists, and indeed to everyone who entered and supported the inaugural Power Players.

“We are delighted that Power Players has proved to be an effective showcase for the excellent business and technical contributions being made by younger people, across our industry.”

Power Players winner Joseph Wu of T Clarke said: “It’s refreshing to see the ECA providing a platform for young professionals within the construction industry and demonstrates that anything can be achieved with hard work and determination. This has been a great experience for me to be involved with and I strongly recommend this initiative to future participants.”

Power Players winner Charlie Harwood of CEF added: “A massive thank you to everybody involved in helping towards this great achievement, particularly group manager Paul Church and general manager Tony Betteridge for their support and guidance throughout. Also a huge thank you to the ECA for hosting such an amazing initiative – it was fantastic to be a part of it.”

Some 1754 votes were tabled by the public, with Joseph collecting 566 votes, and Charlie 532 votes. The vote took place between 9 August and 5 September. Harry Bartle of Chris Bowker Ltd and George Antino of T Clarke and also reached the final four. Videos from all four finalists can still be viewed on the Power Players website – www.powerplayers.uk.com

Power Players was run by the ECA between April and July this year, in collaboration with a wide range of industry partners and supporters. The initiative aimed to identify some of the leading young people across the engineering and electrotechnical services industry.