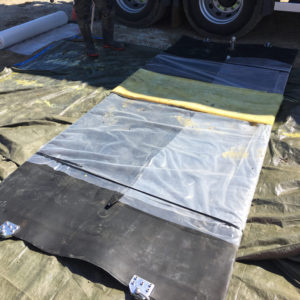 It has deployed a pillow packer to install a series of point repairs inside a 1220mm-diameter inlet pipe supplying water to an area of land being turned into the Wallasea Island Wild Coast.

The Royal Society for the Protection of Birds, which manages the site on the Thames Estuary in Essex, has a 20-year project to turn farmland into a wildlife-rich saltmarsh twice the size of the City of London.

Rehabilitating the pipe was an important step to allow tidal water from the River Roach to flow into a lagoon, one of a number being created to transform 670 hectares of farmland.

Main contractor Bam Nuttall commissioned Lanes Group’s East London depot, based at Rainham, to line the pipe, using a novel approach that ensured the project could be completed with minimal disruption to wildlife and least cost.

The Lanes team used a pillow packer to install five point repairs, also known as patch liners, to rectify defects and strengthen the pipe so it can withstand high water flow rates, especially during high tides.

The pillow packer was lighter and easier to handle than a conventional liner packer. It could be folded to a width of 450mm and installed without an entry manhole having to be dismantled and rebuilt.

Once inside, along with each liner, the specialist packer was inflated using compressed air, pushing the resin-impregnated glass reinforced plastic (GRP) liner against the pipe. The liner could then be left to cure in ambient temperature before the packer was removed.

The Lanes East London depot has invested in two pillow packers, each capable of being used to line circular, egg-shaped, or ovoid pipes with diameters of 600mm to 1300mm. The packers are available for deployment across the UK. 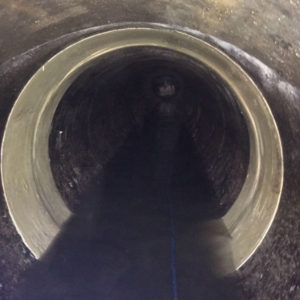 He said: “Pillow packer lining is ideal for fast, safe, and sustainable repair of large-diameter pipes and culverts with minimal disruption to assets, services and the wider environment.

“As such, it was the best solution for this project, because the pipe was in the middle of a site of special scientific interest (SSSI), in an isolated location where reducing potential disruption or damage to the environment was of paramount concern.”

Before the patch lining operation could begin, a confined space entry team used hand-tools to remove shellfish. A jet vac tanker was then used clean debris and silt from the pipe using high pressure water jetting.

Steve Murrells, Area Development Manager for Lanes East London, said: “We have the expertise, technology and experience to work in a variety of sensitive environments, including SSSIs. We’re very pleased to have been able to contribute to such an important wildlife conservation and regeneration project.”

The Wallasea Island Wild Coast Project aims to restore the marshland to how it was 400 years ago. Three million tonnes of material from Crossrail tunnels under London – nearly half the material excavated – has been used to raise land on the site by up to 1.5 metres to create the lagoons.

The wetland restoration project began in 2006. By 2025, the RSPB aims to have created 148 hectares of mudflats, 192 hectares of saltmarsh and 76 acres of shallow saline lagoons, with eight miles of coastal walks and cycle routes.

Species expected to return to the area in significant numbers include avocet, redshank and lapwing. It is hoped the reserve will prove a perfect habitat for new visitors to British shores, including spoonbills and black-winged stilts.