Jobs for the Girls campaign gets revamp 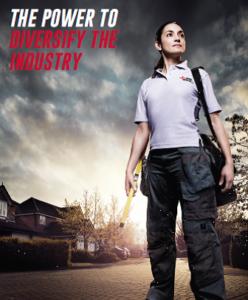 NICEIC has updated its Jobs for the Girls campaign material

The Jobs for the Girls campaign began back in 2011 to encourage more women into the electrical industry.

The aim back then was to highlight the opportunities that exist within the industry and challenge the myth that electrical contracting was for men only. Six years on from its launch, the campaign has scored some notable successes.

NICEIC have met with politicians, appeared on national TV and radio, set up a training academy, sponsored female students and were also the first organisation to run a trade advert featuring a female contractor.

As Emma Clancy, CEO of NICEIC commented: “The plan at the start was to change the way people view the industry. If we are to plug the skills gap then we need to open up the doors to more women and the campaign has done that.

“However, while more and more women are now choosing to take up a career as a skilled tradesperson the numbers are still painfully low. Men outnumber women nine to one in the trades sector – with less than 1% of all electricians estimated to be female.

“NICEIC is committed to creating more opportunities in the electrical sector.”

As part of its revamp, NICEIC has created a new webpage dedicated to the campaign here (www.niceic.com/jobsforthegirls)