A bright young man who chose to follow an apprenticeship in the electrical sector when he left school, is celebrating a major accolade as he strives to develop a career in his chosen profession.

Congratulations go to Jack Hodgson from Carlisle, one of five JTL apprentices working at Meldrum Limited, a  company that has recently become part of VINCI Energies UK and Republic.

He has taken on ‘all comers’ within the VINCI Energies & ROI, to be crowned Apprentice of the Year 2017 – quite a feat to come top of the tree from all the apprentices working in the company across all of the Infrastructure, Industrial and ICT Sectors. Not surprisingly, his bosses and workmates at Meldrum Limited are very proud of his achievement.

Jack left school at 16 and started work at Meldrum Ltd in Carlisle on an Electrical Installation Diploma Course, attending Carlisle College, supported by his JTL training officer Gary Hodgkison and his mentor at Meldrum Limited, Sector Manager Martin Hand. During his working week, Jack works mainly in highly regulated industrial environments for his employer up and down the Cumbrian coast, including working at Sellafield and BAe Barrow in Furness.

Business Unit Manager, Steven Holliday said: “It was a very proud moment yesterday when Jack Hodgson became the 2017 VINCI Energies UK apprentice of the year. After much stiff competition Jack came out on top and has clearly demonstrated his working ability. I think everyone at Meldrum’s would agree that this well deserved accolade couldn’t have gone to a nicer young man. Well done Jack – you’re a worthy winner and hopefully this will be the first of many accolades in your career.

“I would also like to give special recognition and a huge thank you to Martin Hand, whose mentoring skills, help and support for Jack and his fellow apprentices, ensure they are where they are today. His dedication and support has been paramount in the success of these young apprentices and Meldrum.”

Jack said: “It’s difficult to believe that I’ve been singled out from all the apprentices working in the Vinci Energies UK organisation. I’d like to thank those who decided I should get this award – it’s a profession I really enjoy and I’ve found my apprenticeship really worthwhile if occasionally challenging. I’d recommend an apprenticeship to anyone who wants to learn a profession.” 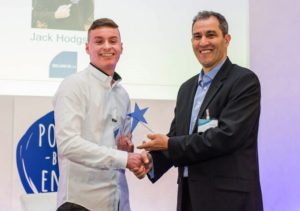