Birmingham building services provider J S Wright is to power up two major community regeneration schemes that are being developed by Rydon at a cost of £60 million in London.
The company will be helping to revamp almost 200 affordable homes within a low-rise estate in north London and a tower in West London after securing a total deal worth around £3.5 million.
J S Wright, which has offices in Aston and central London, will be designing and building a temporary plant room serving 66 of the homes in the first phase of Camden Council’s Bacton Low Rise Estate redevelopment in Gospel Oak, part of Camden’s Community Investment programme.
The installation is part of a £1.8m mechanical and electrical services fit-out deal with Rydon in which J S Wright will be teaming up with long-term partner Dagenham-based R J Electrical and Birmingham project consultants Rolton Group.
The temporary plant will deliver energy efficient hot water heating to each apartment through individual interface units, enabling residents to adjust the heating to their needs.
J S Wright will also be designing and installing hot and cold water, extract ventilation, above ground drainage and lighting services for the properties on the council estate, which is undergoing a £50m revamp that is scheduled for completion in 2017.
The services will be powered by the temporary plant before that is replaced by a new energy centre in August 2015, when work will begin on the remaining 284 homes on the estate.

J S Wright has also secured a £1.8m contract with Rydon to design and build new heating, ventilation and boosted water systems for 120 apartments within 24-storey Grenfell Tower in North Kensington.
The central plant will also serve nine new flats and a remodelled nursery that J S Wright will be fitting out as part of the £10m revamp of the 1970s tower, which is being managed by Kensington & Chelsea TMO on behalf of the Council. The project is scheduled for completion in September 2015.
Grenfell Tower will also provide improved and expanded training facilities for Dale Youth Boxing Club, which has helped to produce stars including Olympic Gold medallist James DeGale and IBF/WBA contender George Groves.
Marcus Aniol, Managing Director of J S Wright, said: “We are delighted to be reinforcing our association with Rydon by being placed at the heart of such major community regeneration projects in London.”
J S Wright, which was founded in 1890, is a specialist provider of mechanical services to the hotels, residential, student accommodation, leisure and office markets.
Our pictures show an artist’s impressions of the first phase of Camden Council’s Bacton Low Rise Estate and Grenfell Tower in North Kensington for which J S Wright will be providing M&E services. 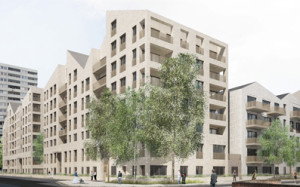 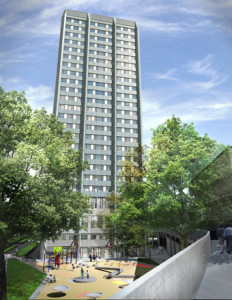