Interserve, the international construction and support services group, has been named as one of the top five contractors and consultants working for Highways England, according to its latest supplier assessment.

Highways England said Interserve’s high StART score reflects how closely aligned the company is to its own values and objectives. The company has allocated an Associate Director to lead on each of the six areas for which the StART system rates organisations: leadership, collaboration, supply chain, delivering value, diversity & inclusion and sustainability.

In the area of diversity and inclusion, Interserve’s StART score was the highest awarded of all the organisations assessed. Highways England said the fact that the company was the first contractor to achieve ‘Investors in Diversity’ accreditation contributed to its high score.

A key aspect of the company’s alignment with the values of Highways England involves its industry-leading SustainAbilities strategy, which puts sustainability at the heart of the company’s overall business approach. Interserve was also praised for achieving BS11000 certification in collaborative business relationships and for demonstrating innovation in each of the six areas on which it was scored.

Interserve’s Managing Director for Infrastructure, Chris Tyerman said: “This impressive StART score and Highways England ranking are testimony to the many years of experience in infrastructure projects that Interserve has, and to the investments we have made in our construction techniques and systems, including the use of advanced BIM and drone technology.” 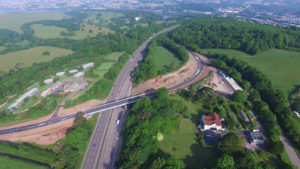