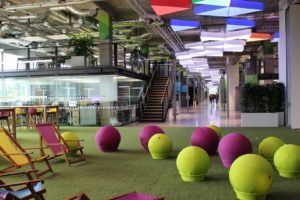 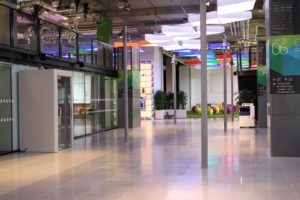 The innovation centre has office spaces that can accommodate from four to thirty workers, in addition to shared co-working space.  The centre also offers bespoke services for residents, such as discounted PR, law and recruitment, and the campus-led design for co-working and collaboration gives it a distinctly unique edge over comparable co-working spaces in London. 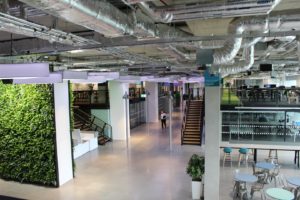 Working closely with M&E consultant, Cundall and M&E contractor, McDowall’s Air Conditioning, AET Flexible Space have supplied and commissioned a total of 13 downflow units (CAM-V) and 146 slimline TUS-EC Fantiles to the new 50,000 ft2 workspace located on the ground floor, and on an additional mezzanine level of the former Olympic Press Centre building.  The CAM-V system introduces conditioned air into the 190mm depth plenum beneath the raised access floor, and is then introduced into the space via the fan terminal unit (Fantile).  The Fantile replaces a standard 600mm x 600mm floor tile and is therefore easily interchangeable.  The CAM-V unit receives used air back at high level for re-conditioning.  This configuration is ideally suited to the “hangar” style building and enables a flexible offering for future reconfiguration of the space as no division of the plenum into supply and return air plena is required. 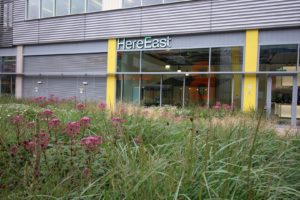 The underfloor system designed for the cellular office pods was also required to run in conjunction with other services, such as the 4-pipe fan coils used to cool the mezzanine co-working areas and the pre-existing trench heating system installed at the perimeter.  Custom floor stands were designed to raise the height of the CAM-V units, located in the central Plexal corridor within special acoustic enclosures.

The Here East development in Stratford was officially opened in June 2017 but was already 55% pre-let 18 months before completion.  Plexal has created a truly unique and flexible workspace offering for the new generation of digital and tech business occupiers.