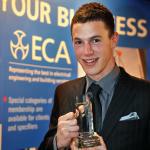 The electrical industry celebrated its finest talent at the UK finals of SkillELECTRIC 2008, a challenging two and a half day practical skills competition designed to promote standards and skills across the sector.
The competition, which took place at Interbuild at Birmingham’s NEC, is organised by SummitSkills and sponsored by ECA, SELECT, ESC, EAL and Electric Center.
This year saw Richard Sagar, employed by Eden Electrics Ltd and trained by the Scottish Electrical Charitable Training Trust (SECTT), crowned the UK SkillELECTRIC champion.  21 year old Richard competed against nine others from all over the UK, undertaking a series of practical tests that demonstrated their abilities and highlighted their outstanding skills.
Visitors to SummitSkills’ stand watched the action unfold as contestants from England, Northern Ireland, Scotland and Wales faced a series of demanding practical tests based on real-life work situations, including installing units, power circuits and cabling to a high specification, and within tight timescales.  Marks were awarded for the candidates’ ability to complete the design, installation and commissioning to an international competition standard with due consideration for health and safety, and the environment.
Winner of the silver SkillELECTRIC award was Neil Frew from Braid Electrical.  Jack Sillito, from WT Parker Ltd, took home bronze.  All three winners were awarded a trophy and an electrician’s multimeter courtesy of Fluke.  All 10 finalists also received a certificate and medal.
Keith Marshall OBE, Chief Executive, SummitSkills, said: “Hosting the SkillELECTRIC UK finals at Interbuild might have exposed contestants to more pressure than in the regional finals, but all of the competitors coped remarkably well and undertook their tasks with confidence and determination.  SkillELECTRIC has been designed to promote standards and skills across the industry, and the competitors of the UK finals have done just that.”
Richard Sagar commented: “I can’t tell you how much this means to me.  It was an honour to compete against such talented people and I’m really pleased that I took part.  I’d like to thank Eden Electrics because I could never have achieved this award without their support.”
SkillELECTRIC is part of Skill M&E – three skills competitions that seek the finest mechanical and electrical engineers in the building services engineering sector.  Skill M&E also incorporates SkillFRIDGE for the refrigeration and air conditioning industry and SkillPLUMB for the plumbing industry.
The best competitors from the UK finals also have the chance to compete alongside other team-mates in the WorldSkills competition.  The biennial event is the largest skills competition in the world and attracts around a thousand contestants from over 50 countries. The next event is in Calgary in 2009.