The winner of the ICOM Apprentice of the Year 2017 was announced at the Association’s annual lunch in June, along with confirmation of the grand total raised for the construction industry charity CRASH by ICOM members. 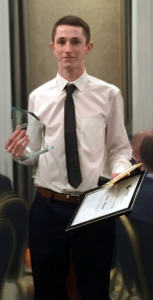 The winner of the 4th ICOM Apprentice of the Year award was John Irvine (pictured), of Cochran who received a trophy, certificate and gift voucher. Runners-up were Kieran Bailey of Powrmatic and Joshua Harris of Nortek Global HVAC (UK).

Held once again at the RAF Club in London, the lunch also saw a collection for the CRASH charity, adding to the funds already raised by members being sponsored for travelling 90 miles in various different, sometimes innovative, ways. The 90 miles represents the distance from ICOM’s office to the CRASH headquarters.

The final total of £2,158 exceeded the target of £2017 and all funds will be used to help CRASH assist homeless and hospice charities with construction-related projects.

Addressing an audience of over 100 ICOM members and guests, ICOM Chairman Simon Parker noted that the industry faces uncertainty in the near future, relating to both Brexit and changing regulations coming into force in 2018 and 2021.

In particular, he observed, the Gas Appliance Regulations will bring considerable change. ICOM’s continuing role in updating members and educating the wider industry will therefore be very important in ensuring that all stakeholders are prepared for such change.

The guest speaker for the event, which was sponsored by Bosch and Powrmatic, was cricketer Geoff Miller, who entertained and amused his audience with a series of anecdotes from both on and off the cricket pitch.

ICOM – The Industrial and Commercial Energy Association – is a not-for-profit trade association, representing and promoting the interests of the non-domestic heating sector since 1933.