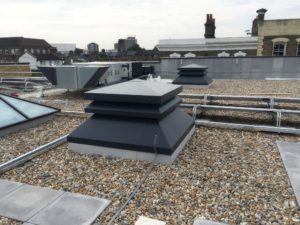 Gilberts Blackpool, the UK’s leading air movement specialist, believes it was the first manufacturer in its field to develop a hybrid system that utilises internal heat to warm incoming air through wall façade louvres without using a heat exchanger. Now a new version of the pioneering Mistrale Fusion System (MFS) has taken the same concept from façade to roof, with MFS-V (Vertical).

MFS-V incorporates two Fusion MFS128 units placed vertically into a rooftop penthouse turret, with a shaft up to 1500mm2 ensuring effective ‘stand-alone’ ventilation of the space below. No additional ducting or plant is required. By routing the ventilation through the roof then internal spaces that have no external façade can still be efficiently ventilated, be it via natural or hybrid principles.

The concept has already been put into practice, at eight schools being built in the Midlands which feature enclosed single storey sunken garden ‘break out’ spaces over classrooms surrounded by a two-storey building: the single storey enclosed classrooms can still utilise the MFS strategy employed in the areas with an external façade by using the MFS-V units sited in the sunken gardens.

MFS-V delivers all the benefits intrinsic to the core MFS.

The standard MFS-V includes a mixing damper within modulates airflow to allow the new, fresh air to mix with the warm exhaust air, thus extracting its heat without the need for an exchanger. The integrated low energy fan energises to blend the internal air, ensuring an even distribution of airflow, with control over temperature and CO2 levels within, and maintenance of a comfortable internal environment for occupants. A wholly-natural version- MFS-VN- is also available, without the mixing damper.

Each unit also achieves relevant acoustic considerations: its operational ‘noise’ is less than 30dbA, and it has been engineered to absorb external noise to keep within the classroom criteria required by BB93. Gilberts has further taken care to attain compliance with Building Regulations Approved Document L: MFS attains air leakage better than legislative requirements- 5m3/HR/m2, and a U value of 1W/m2/°C.

Says Roy Jones, Gilberts Technical Director, “The core MFS is proving hugely popular because of its simplicity of installation and performance. Developing a roof-mounted version further extends its practicality and usability. We initially devised it to answer the bespoke need of the Midlands schools but soon realised it had much wider potential, so have invested in it to bring it to market as a specific product.”