HRH the Duke of York visits BSRIA during 60 year celebrations

As a part of their 60 year celebrations BSRIA’s Bracknell HQ has been visited by HRH The Duke of York KG. The Duke met senior staff before touring the BSRIA test laboratories and meeting the test engineers. 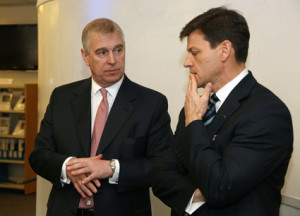 The Duke (pictured with BSRIA Chairman, Tom Smith), follows in his father’s footsteps as His Royal Highness The Duke of Edinburgh visited BSRIA in 1962.

The Duke of York was shown the full extent of the geographical coverage of BSRIA’s Worldwide Market Intelligence division which has researched over 94 countries, and was given an overview of the consultancy and research work BSRIA undertake and how this has delivered improvement in the Built Environment. His Royal Highness then moved onto the BSRIA Library, which by holding over 80,000 entries is considered to be one of the largest dedicated Building Services libraries in Europe.

His Royal Highness then watched a demonstration of a “fan rover” undertaking an airtightness test whilst hearing of the history and development of this method of checking building envelope integrity and the leading role BSRIA played.

The Duke’s tour progressed to the BSRIA Instrument Solutions calibration test labs where he saw a number of instruments being calibrated including BSRIA’s new infrared test rig.

His Royal Highness then toured the BSRIA product test labs where he saw a wide range of equipment being tested and discussed the role that BSRIA play in improving product efficiency by not only testing products but by being involved in the development of Test Standards. 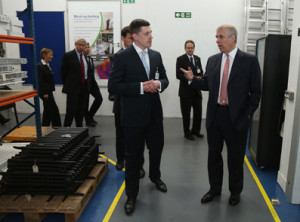 The Duke’s visit concluded by meeting a group of staff, all of whom have worked for BSRIA for over 25 year’s.

“BSRIA is delighted that His Royal Highness visited BSRIA to help us celebrate our Diamond Anniversary, it was a fitting tribute to the work that BSRIA has undertaken in the last 60 years, and whilst we are rightly proud of our heritage, much of the visit was used to discuss the current and future issues that face the industry and the role BSRIA will play in the next 60 years” said Julia Evans BSRIA’s Chief Executive.