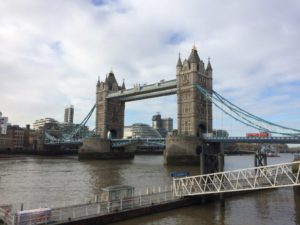 The success of a boiler upgrade project at Tower Bridge relied heavily on close collaboration within the project team and Hoval’s end-to-end service delivery.

As well as being one of London’s most familiar historic landmarks, Tower Bridge is a popular venue for corporate and other events, with a number of unique spaces for hire. The ageing boilers, however, were struggling to meet space heating and domestic hot water requirements, so a decision was taken to upgrade them. The work coincided with the conversion of a 9m high exhibition space, with the addition of a mezzanine to create two new spaces.

The design was carried out by consulting engineers Brinson Staniland Partnership (BSP) and the new boilers, along with associated upgrade works, were installed by contractors T Brown Group. Hoval engineers worked closely with both parties in meeting a number of key challenges, ranging from providing design support to constructing the boilers in-situ because of access issues.

One of the early challenges faced by the design team was that, whilst regulations require condensing boilers for such an upgrade, the Grade I listing of the structure meant that Tower Bridge did not want plumes issuing from the flues on the side of the bridge base columns, 10m above the water level. Following lengthy discussions with the City of London authorities, special dispensation was given to use a bespoke, non-condensing boiler installation.

As a result, Hoval SR-plus 225 high efficiency, low NOx boilers were specified for the project. However, again because of regulations such as the ErP Directive, the fully modulating Riello burners selected for the project had to be supplied separately from the boilers. Two Hoval SR-plus 225kW boilers were installed in each of the two boiler houses, which again presented challenges.

“Not least of these challenges was access to the boiler houses through narrow walkways and corridors, steep stairwells, ship’s ladders and tight turnings,” recalled John Pearson of T Brown. “To overcome this, Hoval supplied the boilers in ‘complete knock-down’ (CKD) form, which were then assembled on site, fully welded and hydraulically tested by Hoval’s engineers, and then casings, burners and controls were fitted.”

The original boilers were mounted on a platform suspended at 15m above the floor and this was extended by T Brown to accommodate the new boilers.

It was also important to avoid disruption to the venue, as well as to traffic in the area, with most deliveries being made during the night. Managing this situation required interaction with the Tower of London project team, the City of London, the Port of London Authority, Transport for London and two local authorities.

“Despite all the challenges, the project went very smoothly and the clients are delighted with the end result,” John Pearson concluded.