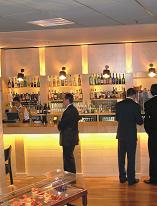 Smoke pollution in the workplace is no longer a problem at the Novotel London West in Hammersmith. Bar staff have not suffered from cigarette smoke since four Honeywell air cleaners were installed by clean air specialists Inn-House Technology. Novotel London West – Novotel’s flagship UK hotel – has also reduced energy wastage, as there is no longer any need to open doors for fresh air when the bar is filled with heavy smokers.

The air cleaners are very effective but unobtrusive, being installed within the ceiling void, with only their grilles visible.

“Smoke pollution is an issue that has grown rapidly in the hospitality industry and we have a duty to our staff to give them the most pleasant working environment possible,” comments René Angoujard, General Manager Novotel London West. “Simple additions like these are a cost effective and energy efficient way of looking after our employees.”

Bar staff are delighted with the Honeywell cleaners. “Smoke pollution has always been a problem in our line of work and we’re delighted that the hotel is doing so much to minimise this sort of pollution,” said Carole Sibuet, Bar Manager. “Everyone agrees the cleaners are good. They have three fan speeds but work satisfactorily on the minimum setting most of the time. If there is a lot of smoke, the staff can increase the speed using infra red remote controllers, to ensure all the smoke is removed.”

Benoit Charrière, Health and Safety Manager, said: “Staff exposure to smoke was always an issue during risk assessments for ISO 14001 compliance. The hotel’s ventilation and air conditioning does not remove smoke, but the Honeywell air cleaners have solved the problem.”

“In the hotel business we recognise that smoke discolours ceiling tiles. Honeywell air cleaners prevent that, so are a very good idea in a new building.”

The installers, Inn-House Technology, return every six weeks to clean and service the units.

Honeywell electrostatic air cleaners actively remove airborne pollutants including dust, tobacco smoke, allergens and viruses, leaving a healthier environment for everyone – especially those who dislike cigarette smoke or suffer from hay fever. So they are unlike ventilators which only move air and unlike air conditioners which only cool air and adjust humidity. Millions of Honeywell air cleaners are in daily use worldwide, in cafes, bars, restaurants, offices, hotels, leisure centres and other venues. By providing clean air, the staff are happier, less prone to illness and hay fever, and enjoy a smoke-free workplace. Customers are more comfortable, so stay longer and spend more.