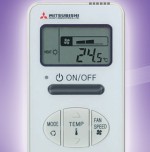 Mitsubishi Heavy Industries (MHI) has launched a simplified, easy to use air conditioning controller designed specifically for use in hotel rooms. The RCH-E3 (H is for Hotels) is based on the well-established RC-E3 controller, which has been proven in use with MHI’s VRF systems for some time. The new hotel room control panel retains the best features of the existing model, including the easy-to-read LCD display and installer-friendly two-wire installation, but only has the functions which a hotel guest will need.

Mitsubishi Heavy’s RCH-E3 offers the user control over on/off operation and fan speed, but users are unable to dial in excessive temperature settings which could reduce system efficiency. User adjustment of cooling and heating is restricted to a range of 16 to 30 degrees. Room temperature will either remain at the user’s setting or can be automatically returned to a predetermined level by the hotel’s Building Management System (BMS). The programmable timer functionality has also been removed from the new unit – this, and other advanced functions, are also controlled centrally through the hotel’s BMS.