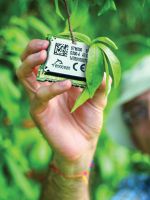 Frank Schmidt, Chief Technology Officer and co-founder of EnOcean GmbH, looks at energy-autonomous wireless systems and shows how they are found in all kinds of buildings.

Living without energy is scarcely conceivable in our high-tech world. Given the growing consumption of energy and the associated costs and environmental burdens, we are constantly seeking new and efficient means of producing energy.

One of these is a technology called energy harvesting, which makes electronic control systems independent of an external power supply by harvesting energy from their surroundings – from motion, light or differences in temperature, for example. Even people themselves can become a source of energy, by pressing a button for instance, or through heat from their bodies.

Ten years ago energy harvesting was a term known only to a small group of specialists but now there is a diverse range of products on the market that are powered by this principle. EnOcean is a pacesetter in the field with its batteryless wireless modules that allow the implementation of fully energy-autonomous applications for automation in both buildings and industry.

Using energy at its source

EnOcean technology is rooted in the field of sensors, devices which offer numerous possibilities for making systems smarter and more efficient. In buildings, for example, sensors can measure important data from heating or air conditioning systems to help reduce energy consumption. Many sensors are usually wired or battery operated, requiring routine replacement and regular maintenance. Furthermore, batteries can be costly in the long run and having to continuously replace them can have a negative impact on valuable resources.

EnOcean engineers solved the problem through the energy harvesting principle. Wherever there is motion, light, pressure, heat or differences in temperature, there are small amounts of energy that can be harvested. Pressing a button is enough to transmit a wireless signal and turn on a light for instance.

The power for the wireless modules is produced by energy converters, such as an electrodynamic energy generator that makes use of mechanical motion, or a miniaturised solar module. EnOcean modules use this energy to detect information and transmit it wirelessly. An additional charge capacitor can ensure an adequate power reserve to bridge intervals when little or no energy can be harvested. Much like the power reserve of an automatic clock, it stores energy for phases in which there might not be enough light to operate an energy harvesting module by a mini solar cell. In complete darkness the energy stored will suffice for several days of regular operation.

EnOcean-enabled devices are also able to work in difficult ambient conditions. Additionally, modules save energy by executing all of the operations of sensors and actuators very rapidly, and promptly turning off when they are not needed. For this purpose the sensor modules incorporate special timers that draw only about 20 nanoamperes of current, fully deactivating all other components during sleep phases and waking them again when they are required to operate.

Besides harvesting energy from light or motion, EnOcean wireless modules can use heat as a power source. Electricity is produced from differences in temperature, from the heat of parts of machinery for instance, radiators or even the human body. Meaning that radiator valves, ventilation flaps or sensors can be deployed wherever heat is available.

Wireless technology plays a special role in how the energy harvesting modules work. The EnOcean wireless signal is transmitted in the 868 MHz or 315 MHz frequency band, meaning it can be incorporated into solutions worldwide. Telegrams are just one millisecond in duration. Although transmitted power is up to 10 milliWatts, the wireless transmission used here only has an energy requirement of 50 microWatt seconds for a single telegram. That is about the same as the power needed to lift a weight of 1 gram by 5 millimetres. Requiring so little energy, a sensor can be powered simply by operating a light switch to send the necessary wireless signal to a lamp.

The short telegram is randomly repeated twice in the space of about 40 milliseconds to prevent transmission errors. Transmitting data packets in random intervals makes the probability of collision extremely small. Installation and parallel operation of a large number of wireless switches and sensors in restricted space consequently poses no problem at all. Each EnOcean module comes with a unique 32-bit identification number to exclude any possibility of overlap with other wireless sensors. The range of EnOcean wireless sensors is up to 30 metres inside buildings and 300 metres in the open.

Since 2003, EnOcean has been supplying this basic technology for totally maintenance free sensors and actuators that harvest their energy entirely from their surroundings. Such a system is ready to go right out of the box and OEMs can implement their own energy-autonomous applications simply and at low cost, without first accumulating expertise in wireless and energy harvesting.

Sustainable energy management concepts can therefore be implemented with reduced effort and expense. Dispensing with wiring means flexibility in where sensors or actuators are located, placing them where they produce the most accurate readings.

Energy-autonomous building automation solutions range from room thermostats with pre-set temperature to maintenance free motion detectors and even window handles. When a window is opened, for example, the radiator is automatically turned off to reduce energy consumption. Flexible installation without wiring is also an advantage when renovating older properties because units or fixtures can easily be removed or relocated.

At the same time, this saves kilometres of wiring, conduits for installing it and significant construction costs. The noise, dirt and dust issues associated with installation are also eliminated. As a major component of a control system in buildings, batteryless wireless technology can also result in substantial energy savings of up to 30%.

In the relatively few years since its first appearance, energy harvesting wireless technology has found its way into many applications in many sectors and there are no foreseeable limits to its further development. As the technology advances, possibilities are emerging of using energy-autonomous, service-free wireless modules for early warning of health risks or in living environments for the elderly, adding extra functionality for more comfort and convenience, security and safety to existing systems.

In agriculture, sensors could be placed over large areas to provide early warning of forest fires, or to ensure that crops are receiving an optimal supply of water and nutrients. In all these scenarios, wired systems would be too elaborate in their technology and by no means cost effective. Energy harvesting wireless technology is consequently set
to play an increasingly important role in solving everyday problems more reliably, more conveniently, more economically and utilising existing information sources.