National Contractor United Living Group has appointed a new member of staff and reshuffled its southern refurbishments division based in Swanley, Kent, in response to the high volume of residential refurbishment contracts that are coming into the business. 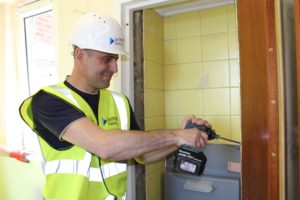 Over the past six months, contracts worth more than £ 25.5 million have been secured including a £4m refurbishment scheme for the London Borough of Enfield, a £4m external wall insulation and external fabric repair project for Stevenage Borough Council, £2.25m worth of kitchen and bathroom replacements for L&Q, and £600k of mechanical and electrical works at various schools on behalf of the Royal Borough of Greenwich.

As United Living continues to secure new contracts, Jon Wallis has joined the group as Refurbishments Operations Manager, beginning the next chapter in a 34-year career which he started as a quantity surveyor.

Jon has extensive experience of the social housing regeneration market having previously worked as divisional manager (2005-2009) and then commercial director (2009-2012) for Apollo.  He played an integral role in their 2012 merger with Keepmoat, after which he became Group Commercial Director for Keepmoat Regeneration, turning over circa £850m.

His appointment is part of a wider team reshuffle across United Living’s southern refurbishment division.  A number of promotions and new starters over the last quarter will ensure United Living has a firm structure in place as the business expands further.

Daren Moseley, divisional director for United Living (South), said: “I am very pleased to welcome Jon to our team and fulfil an important vacancy that we had in the business.  Jon has a solid background in our industry and his expertise will be highly valuable as we continue to work towards our goal of becoming a £0.5bn contractor by 2020.

“Given all of the external changes that have been happening recently in terms of Brexit and politically, I’m pleased to say that our plans to deliver continued growth remain firmly on track.  We have restructured the team to ensure we have the capacity to bring in new contracts and grow the business sustainably.”

Jon Wallis, newly appointed refurbishments operations manager at United Living, said: “Whilst there is clearly a lot of uncertainty in the wider market at present, my personal objective is to see that United Living continues to play to its strengths and I will be ensuring it is the service provider of choice for both existing and potential new clients.”