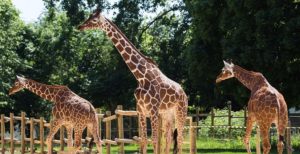 The three giraffe, Gerry, Tom and Dayo, are the latest attractions to arrive at the Wild Place Project, a new venture established by Bristol Zoological Society in South Gloucestershire. The family outdoor adventure park has wildlife from the UK and across the world and, in addition to giraffe, has lemurs of Madagascar and grey wolves of Europe. 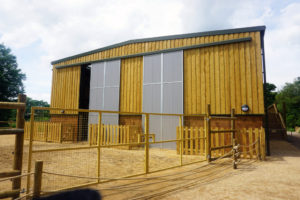 The giraffe enclosure was built following an appeal that attracted support from the public and corporate sponsors. The purpose-built home, which stands on nearly two acres, was constructed by Keynsham-based firm Dribuild.

Wayne Raven, who headed the project for Just Air Conditioning, said, “The ceiling-suspended units had to be located above the public viewing balcony, to ensure they were out of reach of the giraffe, which can grow up to 18 feet tall.” 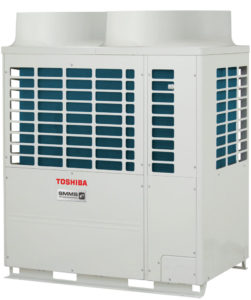 He explained: “The system is locked into heating mode, as its key function is to maintain comfortable temperatures for the giraffe when ambient conditions fall at night and in the autumn and winter seasons.”

Visitors can walk into the viewing area on the ground floor, which can accommodate up to 30 people, and watch the giraffe from just a few feet away. The site’s zebra and eland have been moved to a new house just next door, and share the watering hole with the new residents.

Nigel Simpson, head of operations at Wild Place Project, said, “The giraffe have all settled in well and have adapted to life at Wild Place. People think the house is great, and we are getting lots of positive feedback.” 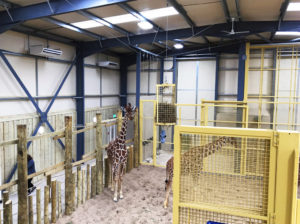 The giraffe house is linked to a new field conservation project aimed at saving one of the few remaining populations of Central African giraffe left in the wild. Experts from Bristol Zoological Society travelled to Cameroon to begin a research project to map their habitat and conduct a population census of the remaining Kordofan giraffe using drones.

Wild giraffe numbers have fallen from 140,000 to less than 80,000 in just 15 years. There are now fewer giraffe left in the wild than African elephants. The team hopes to establish whether there is a sustainable population of this threatened subspecies that they can work with to conserve and help save from extinction.