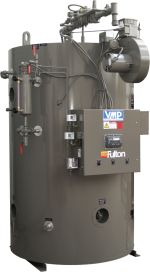 Within months of launching a series of energy saving products including the ModSync boiler sequencing system and TDS energy recovery system, Fulton Limited has demonstrated its ongoing commitment to research and development and the environment with the introduction of a new modulating burner.

Based on Fulton’s existing on/off burner, the new modulating burner uses a linkageless burner management system to operate two modulating actuators. One actuator regulates the flow of gas and the other adjusts air flow to ensure that optimum combustion is possible across the full firing range of the boiler. To optimise combustion, each of the valves is capable of being adjusted by as little as 0.1º allowing small adjustments to be made to the burner output.

Gas flow into the burner is also controlled by two fuel valves, the first acting as a safety shut-off and the second being a constant pressure governor. Burner output is also regulated via a pressure transducer and controller which uses a 4-20mA signal to modulate the burner output.

The new modulating burner is available as an option on all gas fired vertical boilers in Fulton’s range.