The  independent Yorkshire heating and plumbing company has taken on an apprentice, a bid writer, a plumbing and heating engineer and a contract manager.

Bid writer Lisa Todd was previously a member of the contract-winning team at Balfour Beatty while contract manager, Nick Heede – who also brings a wealth of experience – is managing in-house engineers and subcontractors for commercial contracts.

Lisa commented: “I’m delighted to have joined this respected and experienced family business and look forward to playing a key role in helping HCS Mechanical Services to further increasing the volume of contracts secured with public and private sector clients.”

Nick said: “Having worked alongside HCS in a previous role, I was always impressed by the team’s skill and professionalism, so when they approached me I jumped at the opportunity to come on board.”

MD, Richard Clarke, said: “The combined expertise and enthusiasm of our new recruits will directly contribute to HCS’s continued growth. As a business we are committed to nurturing young talent and are pleased to support and develop Jack to achieve his potential.” 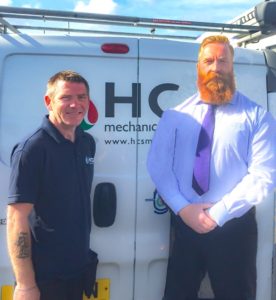