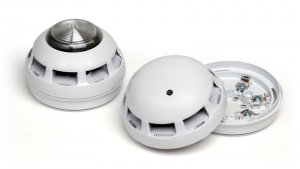 Fike Safety Technology has introduced a new detector for its popular TWINFLEX®pro intelligent 2-wire fire alarm system. The Multipoint ASD detector has all of the features and benefits of the existing detector, including 7 modes of detection and optional built-in sounder, as well as a raft of additional features. The new detector includes an optional integral strobe, allowing the 2-wire installation of an advanced smoke/heat detector, sounder and strobe, in a single cost-saving device.
The Multipoint ASD detector incorporates a new advanced optical chamber for enhanced smoke detection and a simple LED in the base, which flashes when the detector head is removed. This enables users to easily identify which detector is missing even from considerable distance, e.g. in a high-ceiling building. Easier testing and maintenance at height is further simplified as the new head is fully compatible with the industry standard Solo Detector Tester pole.
With TWINFLEX®pro the whole system can easily be installed using only one pair of wires per zone – installation savings can be as high as 40%. As Multipoint ASD offers 7 different modes of detection, the installation is made even simpler since one device suits all applications.  This versatile system has the ability to differentiate between call point and detector alarms; can accommodate up to 32 devices per zone; has a separate fault monitoring display for each zone; incorporates a man walk test facility and allows zones to be configured without the need to use resistors or capacitors. To make the TWINFLEX®pro system even more flexible, Fike can also provide a special Output Unit. This can be situated anywhere on the zone circuit and is ideal for connecting to equipment such as plant shutdown controls and door release mechanisms.
Checkpoint Alarm Confirmation Technology is a feature of the system that has seen TWINFLEX®pro installed extensively in applications such as Houses of Multiple Occupancy (HMO). This is a configurable pre-alarm that can be set on detectors in dwelling areas that allows time to investigate the cause of the alarm before building-wide evacuation is initiated. This can significantly reduce the disruption from nuisance alarms.
For further information please contact Fike Safety Technology on Tel: 01633 865 558, Email: fstinfo@fike.com or visit www.fikesafetytech.co.uk.