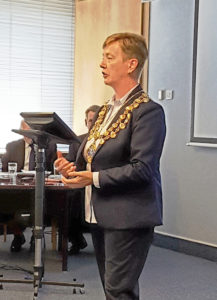 Although a prominent face in the plumbing sector, it wasn’t where her career started. In fact Tracey was an Aircraft Technician in the RAF for 22 years before discharging as a Sergeant with qualifications in both Engineering and Aeronautical Engineering. She subsequently served a plumbing apprenticeship ‘by accident’ after being encouraged to change her post-RAF career plans from training adults with learning difficulties into a career in the plumbing industry.

In her address, Tracey spoke of her journey in the industry to date, the importance of a job well done and reassuringly, the lack or prejudice she has seen within the sector. She spoke of her experience entering Further Education (FE) as a plumbing lecturer, along with her concerns for standards within FE teaching, stating, “The quality of delivery in some colleges worries me and I have often raised this concern to others. Don’t get me wrong, some colleges and centres do a really good job, but it appears that we are coming across quite a few that are falling well short of the mark.”

After discussing some of the issue surrounding the Trailblazer apprenticeships and the fears that some areas of the plumbing industry are being ignored, Tracey moved onto the issue of experienced workers, who hold knowledge and skills but no formal qualifications.

“If we want to address the issue of getting our industry more regulated and helping those with ‘Granddad’s rights’ to gain formal qualifications in the smoothest way possible, then this in turn should also possibly go some way towards addressing the issues surrounding the ‘cowboy’ plumbers. It’s quite a scary thought that anyone could enter a customer’s house and call themselves a ‘plumber’, but with no formal qualification to back it up, and very few customers would be bothered to check. This is one of the key areas I would like to try and help address in my term in office.”

On her ‘first’ as female President Tracey said, “I feel extremely proud to be our Institute’s first female President, but I don’t want this to detract from the role. Yes, I would love to see other women following my lead and yes I do want to encourage more females into the industry, but simply by using a subtler approach of just showing there are no barriers to what you can achieve in life, only the ones you put there; but that rule applies to anyone – male or female.”

Kevin Wellman, CIPHE CEO, said, “The CIPHE is looking forward to an exciting year ahead with Tracey at the helm in the Presidential role and Christopher taking up the reins as Vice President.”

“Each President makes a unique mark upon the industry and the Institute, breathing fresh breath into what is a role over 100 years old. We’ve seen Tracey’s knowledge and passion for the industry shine through in her year as Vice President and know what a really strong ambassador she is for everyone in the industry. We wish Tracey a ground breaking year, full of enjoyment and success.”