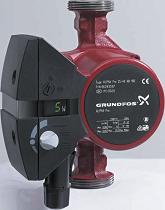 When energy labelling was first introduced for European domestic appliances in 1995, it got a fairly low-key reception. However, from these inauspicious beginnings, the initiative has gained significant momentum and is now instantly recognised with more and more people actively using it, as both a standalone and as part of the mix, to make product relevant purchasing decisions.

The scheme has continued to grow with more and more product ranges being added and manufacturers trying to gain a competitive advantage by having yet more efficient products, potentially resulting in the introduction of A+ and A++ products. The converse is that poorly performing products are disappearing as demand for them wanes.

With household electrical consumption continuing to increase year on year and the escalating price of energy, it is likely that this focus will continue unabated.

In March 2005 domestic circulators joined the scheme albeit currently on a voluntary basis. Four manufacturers – including Grundfos – who between them account for approximately 80 percent of the domestic circulator sales in Europe, committed to add the energy label to all their relevant product packaging (see fig 1).

Creating such a scheme was far from simple as it applies to the entire EU where requirements for heating vary considerably between northern and southern Europe this is exacerbated by the gap created by the varying levels of technological development between the east and west. As a result it took four years, working in conjunction with Europump, the European pump manufacturer’s trade organisation, to develop the scheme that was initiated on Grundfos’ request.

The final scheme is based on the pumps EEI – Energy Efficiency Index – calculated according to an annual energy profile. The current legislation covers independent circulator pumps with integrated pump and motors. The pumps are glandless and are built on the centrifugal principal and the power consumption they demand from the electric grid must be less then 2,300kW (see fig 2).

With an estimated 120 million of these pumps installed throughout Europe and with their energy consumption equal to that used by washing machines, the potential energy saving by selecting the most energy efficient versions is huge.

‘A’ is definitely top of the class

‘A’ rated pumps can use up to 78 percent less energy than their fixed speed counterparts. So regardless of whether people are coming at this from an energy conservation viewpoint or wishing to save money on their fuel bills, this is a win-win situation.

Grundfos has always been at the vanguard when it comes to energy saving products, in fact since Grundfos introduced the first variable speed pumps in the late 90s, we have been leading the way in trying to cajole, encourage, educate and explain to installers, contractors, consultants, distributors and the general public – the benefits of transferring from fixed to variable speed pumps.

This argument was reinforced in 2001 with the introduction of the Grundfos MAGNA – a family of mid sized circulator pumps for heating systems – that integrated a permanent magnet motor into a pump for the very first time. This technology has continued to be developed and the Grundfos MAGNA was officially the first pump to qualify as an ‘A’ rated product.

It may surprise you that most standard domestic circulators in this country are actually a ‘D’ or ‘E’ product. Even the Grundfos ALPHA introduced in 2003 and heralding a real breakthrough in energy saving was a ‘B’ rated product. September 2005 saw the launch of the worlds first ‘A’ rated domestic circulator – the ALPHA Pro.

With an annual energy consumption of an average of 117 kWh – this new ALPHA Pro series completely obliterates the previous 500-600 kWh annual norm. This huge improvement has been achieved through a combination of the onboard frequency converter, a completely new and compact stator construction and a unique permanent magnet motor.

Another first for the product is that never before has a circulator pump this small been equipped with a frequency converter. (A new patent has been taken out to cover the cooling system that operates in conjunction with the electronics.) This means that not only is it possible to regulate the speed accurately according to the operational situation, but it also makes The ALPHA Pro the quietest circulator pump on the market (less than 43dB(A) MSPL).

The construction of the new compact segmented stator breaks with tradition. The new design, developed by Grundfos, has made it possible to create a stator using considerably less copper wire. This results in minimum power loss in the motor and of course the need for less copper is another major benefit to the environment.

The motor that drives the ALPHA Pro range is based on permanent magnetic technology (like the MAGNA range).

In fact these pumps are so efficient that when modulating, the power consumption can be as low as 6W, and you don’t have to take our word for this as the permanent LCD display has this kW consumption continuously available as a read-out.

Each KW of energy saved (based on coal production) really can make a difference as it saves the environment an incredible:

The Part L Building Regulations applied to England and Wales brings Government legislation into force for the Conservation of Fuel and Power.

There are four Approved Documents that provide top-level legislation and are referred to as ADL1A and ADL1B for new and existing dwellings and ADL2A and ADL2B for new and existing non-dwellings. They are amended periodically and the new Regulations are due out in April 2006 in conjunction with the UK implementation of the European Energy Performance of Buildings Directive.

This will provide Energy Labelling of buildings for owners and prospective purchasers in both the domestic and commercial market and provide an instrument to improve the overall efficiency of buildings.

In these regulations covering domestic properties, reference is made to the Domestic Heating Compliance Guide, which provides more detail on the specific requirements of the Regulations. For example they cover the minimum boiler efficiencies governed by their SEDBUK rating. Requirements for thermostatic radiator valves and automatic bypass arrangements are included here.

Now that the Energy Savings Trust have recognised the glandless circulator labelling scheme by accreditation for ‘A’ and ‘B’ rated pumps, it is possible for these to be incorporated into the Part L1 Building Regulations.

One of the key requirements to Part L2B is: “To provide energy efficient and properly commissioned fixed building services with effective controls”. As a result of consequential improvements to a building, the energy efficiency of the equipment and controls is essential. This will entail the provision of new efficient pumping systems.

Improvements in Air Handling Plant Specifications have especially been targeted. There are to be specific fan power ratings on various systems and variable speed drives mandated for motor fans larger than 1.10 kW. This aids commissioning, future flexibility and energy efficiency gains.

Replacement and upgrading of 15 year old heating and cooling equipment is recommended and this will inevitably include pumps. Commissioning and optimum working conditions will give rise to considerable re-work in order to achieve maximum efficiency.

The HIP is the mechanism by which the EU Directive on Energy Performance of Buildings will be implemented.

Originally announced in the Queen’s speech in November 2003 this scheme will initially affect owner occupied buildings and will seek to provide impartial and reliable information on the condition and energy efficiency of a property.

Via a Home Condition Report (HCR) buildings will be assessed and given a Standard Assessment Procedure (SAP). The more energy efficient the building the higher the SAP rating therefore ensuring lower fuel bills and lower CO2 emissions.

• Types and efficiency of the heating system, including its controls.

• Ventilation of the property.

It is only a matter of time before this initiative will be implemented for commercial buildings.

Energy labelling is going to continue to go from strength to strength, we believe any product driven by a motor that draws on energy and therefore generates CO2 will ultimately have an energy label applied to it regardless of whether it operates in a domestic or commercial setting.

The industry has been slow to embrace change but we believe this will gather pace as consumer awareness continues to grow. This push/pull effect will continue to cause momentum to increase and the successful companies will be the ones who set the pace.

The bar has been raised with the introduction of energy labelling on domestic circulators. This, we believe is the beginning and that all pumps will soon carry this distinctive logo.