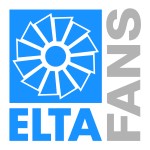 When Forest Way Special Educational Needs School was opened recently, thirty five Elta Fans were installed as part of the system to provide a comfortable, effective and well ventilated learning environment for the pupils.

The school, situated in the National Forest in Leicestershire, is a new co-educational special school for 138 pupils aged 3 – 19 years old with a wide range of special needs.  With a location about a mile from the centre of Coalville, (a market town close to Junction 22 of the M1 and ten miles north-west of Leicester) the school has an interactive forest heart and features corridors of curved walls using floor to ceiling images of woodland scenes.  Designed with sustainability in mind, the school incorporates several integrated, eco-friendly systems, added to which is the low energy ventilation system that utilises the Elta fans.

The system is powered by renewable energy and automatically controls the ambient environment in each classroom.  The main contractor for the development was Wilmot Dixon, with Fans and Spares Nottingham (Elta’s local distributor), providing the Elta equipment to Derry Building Services.

The school is intended to be a major focal point and resource for the whole community and was designed around an internal courtyard to a very high specification. Many of the inspirational features are there to provide a very intimate and tactile environment for the students with multiple learning difficulties.  Other environmental systems incorporated include a rainwater harvesting scheme which is used to flush the toilets and a wind turbine to meet some of the school’s energy requirements.  There is strong local community support for the school, which is currently preparing a bid for Specialist Schools Status in the area of Communication/Interaction.

Adrian Franklin, the Building Services Engineer at Derry Building Services responsible for the project, said: “We have successfully worked with Elta on a number of contracts and worked closely with Elta on this project to ensure we had the right units for the application and to meet the client’s needs. The fans featured PIR control, with speed controllers also fitted to ensure they are operating at optimum capacity.  The fan units were clearly identified, along with the ancillaries, to identify the relevant locations.”

Elta Fans Sales Engineer Keith Lomas commented – “schools are undoubtedly a growing market for us at the moment. Many people see a need for an ecological approach to the construction and services installation process. In this way we can offer the children a chance to be educated on the importance of a healthy awareness of their environmental responsibilities. Elta have a philosophical approach that fits in very well with this ideology.”

Elta Fans in the UK have been manufacturing fans for more than 30 years now with a continuous investment in people, plant and machinery to produce modern development techniques for a fast, responsive and flexible approach to satisfy ever changing market conditions and energy efficiency needs.

Whilst its principal manufacturing plants are located in the UK – in Kingswinford in the West Midlands and Fareham in Hampshire – there are also strong global facilities (including manufacturing and assembly operations) in Australia, New Zealand, India, Malaysia and South Africa.