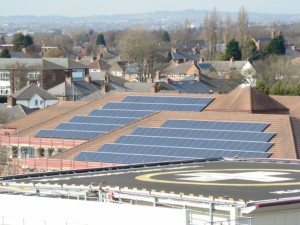 Ecolution, a leader in the design and installation of renewable systems, has installed Solar PV panels for the Heart of England NHS Foundation Trust (HEFT) in Solihull Hospital and Heartlands Hospital, Birmingham. The work was completed in less than six months by March 2014 and is predicted to deliver over £2million from energy savings and Feed-in-Tariff payments (FIT) within the next 20 years. 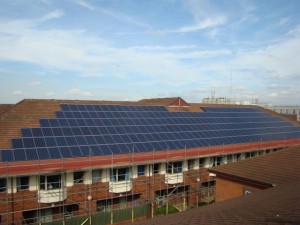 Main contractors for this project, MITIE Facilities Management, worked with HEFT to adhere to MITIE’s CarbonCare service. This guidance was offered to HEFT as a way of saving energy, cutting costs and reducing its carbon footprint. Ecolution’s experts had suggested further possible savings from the installation; initially HEFT requested over 250kWp for each hospital, however, Ecolution advised that such installations would drop FIT levels by 35%, therefore only 250KWp on each hospital should be installed.

Tier 1, black-framed Hyundai 250Wp poly-crystalline solar modules were used for the entirety of the hospitals. The 2000 panels were installed on to over 28 roofs of varying pitch, orientation, height and covering. These were then paired with Goodwe inverters which were chosen for their excellent reliability.

Pete Sellars, Director of Estates for the NHS was delighted that the total £3m project could be completed without any closures of wards or disruption to critical services. The solar arrays were installed and working prior to HEFT’s deadline of 31st March 2014.

To negate this potentially life threatening problem, Ecolution designed  a bespoke solution by connecting a radio frequency module into a relay that provided Ecolution with a radio signal whenever the generator was about to engage.

The PV distribution board contactor then receives a signal to stop sending the electricity supply to the PV system, ensuring that the generators and PV systems do not operate simultaneously. Ecolution’s precision and attention to detail helped overcome this challenge with peace of mind and efficiency for the ongoing running of the hospitals.

With HEFT spending over £1m per annum on energy, this installation will be saving them over 10% on their current expenditure, with the benefit expected to rise even further as electricity prices rise in due course.

It has been conservatively estimated that HEFT should receive over £2,000,000.00 in benefits from the installations over the next 20 years, with approximately 50% from energy savings & 50% from feed-in-tariff revenue.

Robert Harley, Business Development Manager for Ecolution commented: “This project was completed in time, on budget and without any complications, despite the high level of technical detail required on this project. Throughout, Ecolution continually listened to the needs and concerns of NHS and MITIE employees and adapted our working practices to accommodate their requirements without moving away from the initial brief that we were given”.