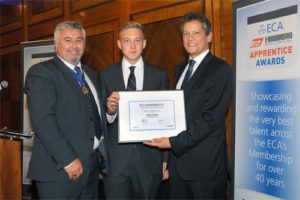 The ECA Edmundson Apprentice of the Year Award winners were announced at a prestigious ceremony in London on September 21st, with Harry Bartle, 21, of Morecambe-based ECA member-firm Chris Bowker Ltd, being crowned this year’s winner.

Announcing the award, Edmundson Director Mark Felber said that the judges believed Harry would be a great ambassador for the industry over the coming year.

Mr Felber said: “We are delighted to have sponsored the ECA Edmundson Electrical Apprentice of the Year Award for the last 42 years.

“Edmundson has a long established policy of developing young people within our sector through both our apprenticeship and graduate schemes.

“The electrical and electronics industry continues to lead the way in offering great opportunities for young people to develop a rewarding and enjoyable career.”

Harry’s prize included cash, a state-of-the-art tool kit and a study tour sponsored by Schneider, in which he will visit their facility in the French Alps.

Speaking to the VIP audience, which included his proud parents, a delighted Harry said: “It’s an absolute honour for me to be recognised as ECA Edmundson Apprentice of the Year. The training and experience I have received from Chris Bowker has been first class and it’s been a pleasure to represent the company.”

During the next 12 months, Harry will represent the ECA, supporting the Association’s work to encourage more youngsters into the industry.

The judging process involved rigorous regional and national stages judged by a panel of industry experts.

ECA CEO Steve Bratt said: “We’re delighted that Harry has deservedly won this year’s ECA Edmundson Award for Apprentice of the Year – a real indication of the talent that exists in our industry.

“Congratulations also to Chris Bowker Ltd, who are leading advocates of high quality training and career development across the electrical and building services industry.”