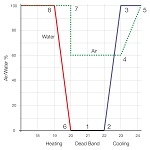 EC fan coils are energy efficient, flexible and very popular with consultants and end users.  Andrew Sargent, General Manager for Advanced Air, explores what changes have been made in fan coil technology recently and how they can impact on the market.

EC motors have meant that a tremendous change in the energy consumption of fan coils has taken place since their introduction.  In fact so much so that virtually all consultants and designers are now utilising EC motors as opposed to AC induction types.  With AC motors a typical Specific Fan Power of .7w/l/s can be achieved, with EC motors this dramatically reduces to .3w/l/s and with some selections down to .2w/l/s/.

EC motors have other features apart from their overall high efficiency and these include the ability to vary the speed across a wide range by simply changing the voltage via 0-10 volt signal to the actual motor.  This variability is very important since as we all know the load required by a building will vary according to the time of the day, time of the year, occupancy, etc.  The building hardly ever requires 100% cooling and therefore all the drives within the air conditioning system should be capable of dealing with this constantly changing demand profile by having this variable output.

So with EC motors offering the possibility of variable speed we then have to question why we need to run the fan coil at 100% speed and air flow all of the time.  In fact there is a compelling argument to vary the air volume according to the load demand down to about 60% of rated air flow.  In other words the fan coil would operate between 100% and 60% air flow.  The 60% is used since with some diffusers it can be a problem with air dumping at, say, 50%.  Limiting the air flow to this range can save a further 60% of the energy that would be consumed with a constant volume EC fan coil.  The control of this VAV EC fan coil is important and a suggested control philosophy is shown in Figure 1.

Pressure independence means that the fan coil delivers the required air volume irrespective of changes in external pressure.  This is an excellent feature because as the filters get dirty and the resistance increases, the air volume remains the same even if the duct configuration has changed such that pressures are increased or even reduced, the pre-set air volume on the fan coil will be delivered to the respective air diffusers.

This pressure independence can be achieved in a variety of ways.  We have a smart card embedded in the motor which contains a three dimensional algorithm which ensures the motor/fan assembly delivers a constant air volume.  It mathematically manipulates the fan characteristic into a straight horizontal line giving constant volume irrespective of pressure as shown in Figure 2.  These air volumes in litres/second would also correspond to a particular voltage which can easily be set either at the fan coil unit or very simply remotely at the BMS.

The fan assembly therefore has a whole series of horizontal lines representing the fan characteristics at various voltages.  If the voltage is set constant then the airflow is maintained at the set point by the smart card and motor.  If variable air volume is required then from a 0-10 volt signal from the controls/BMS, the supply voltage to the motor can be changed, hence varying the speed, set point and air volume.  Following on from this it is now possible to pre-set the air volumes in the factory and therefore no commissioning of the unit is required on site.

The fan coil in this configuration can be run even if the BMS is not working, which is often the case.  So no BMS is required to get the fan coil operating in this pressure independent mode.  When the BMS is connected control of the air volume can then be overtaken by the BMS and if any changes are required the air volume could be adjusted through these controls.

Another way of creating pressure independence is a little more complex and requires a fan in each discharge spigot and the plenum within the fan coil unit needs to be segmented so that there is a separate and isolated air path for each fan and spigot.  By the use of additional control each of these air paths can be made pressure independent which then means the fan coil has the benefits as already outlined, but obviously there are extra cost implications.

As most designers would tell you space for plant is always an issue.  The challenge for all those concerned in a project is generally trying to squeeze the equipment into tight places, for example with refurbishments there is generally very limited ceiling void space.  This again is where the fan coil unit can be adapted to meet the project requirements with a slimline unit which has been developed to fit in to ceiling voids of around 200mm.

With horizontally mounted fan decks utilising 200 Watt EC motors, very much larger than the conventional 75Watt EC motor, very low noise levels can be achieved for fan coils mounted in the ceiling voids.    In fact we have been involved in a project for media rooms where we needed to achieve NR25 in the room and this was done utilising the horizontally mounted fan deck design.  They also give a much lower SFP down to 0.15w/l/s.

Fan coil systems have changed considerably with the help of EC motor technology.  In addition, new developments as outlined here have made the fan coil an extremely versatile system.  Recent market statistics from BSRIA show that fan coils are by far the most popular system with a market size in 2011 (the latest figures available) of over £27M.

The combined total market for all other systems in this terminal unit category, including chilled beams, VAV, induction units, chilled ceilings, etc is still less than the total fan coil market size.  These figures were compiled by BSRIA on behalf of HEVAC and taken from manufacturer’s returns.  We believe the facts speak for themselves and put EC fan coils as the terminal system of choice for most projects and designers.