The ductwork manufacturer and installation contractor E Poppleton & Son has been acquired by its Managing Director Tim Hopkinson and Sales Director Nigel Edwards-Hughes.

Hopkinson, who is also President of the Building Engineering Services Association (BESA), and Edwards-Hughes, who has been with Poppleton for more than 42 years, will now run the business as joint owners/directors.

They said it would be “business as usual” for the 93-year-old Colwyn Bay business, but with some “exciting plans for future growth”, particularly in high tech sectors such as the pharmaceutical, life science and nuclear industries.

The two directors said that the company’s “reputation for quality and project delivery” gave them a sound platform on which to grow the business, and they would be looking to add to the current 50-strong workforce.

E Poppleton was founded in 1926 when Edward Poppleton and his family moved to Wales from Yorkshire. It has been a member of BESA for almost 60 years and Tim Hopkinson is the third President from the company following in the footsteps of Gareth Vaughan, who was President of what was then the HVCA in 2008/9, and also the founder’s grandson Edgar Poppleton, who served in 1988/89. 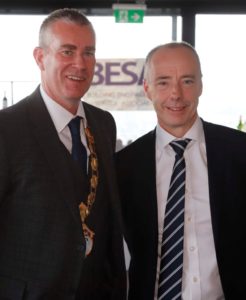