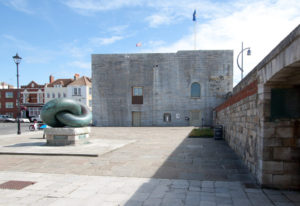 Built in 1494 during the reign of Henry VII, the historic Square Tower in Portsmouth has undergone many changes of use during its 524-year life. Following a major refurbishment, including a new heating system, the tower, which is owned by Portsmouth Council, has become a popular venue for weddings, family celebrations and corporate gatherings.

During the refurbishment Dunham-Bush worked closely with Portsmouth City council, who undertook the design of the heating system. All work had to comply with English Heritage requirements and consideration had to be given to protecting the tower’s structure without damage or alteration to its appearance.

An appropriate aesthetic integration of the heat emitters was also an important criterion for product selection. The new system had to be functional, unobtrusive and quiet, delivering an even distribution of efficient heating around the building.

The installation was carried out by Concept Building Services (Southern) Ltd, and project managed by SSE Contracting Ltd, Portsmouth.

This historic building is leased by the council to proprietor Steve Hender, who, commenting on the work and the future for the Tower, said: “The new heating system is fantastic; it means that for the first time we can guarantee to our customers that the building is warm!  And not only is the system highly efficient, it has been installed in a manner that is most sympathetic to the historical nature of the building. I am utterly delighted and I can’t thank everyone involved sufficiently: Thank you!”

During the English Civil War (1642-1649), the Square Tower was used to store over 1200 barrels of gunpowder, which proved useful as a negotiating chip when besieged Royalist forces were discussing the terms of their eventual surrender to the victorious Parliamentarians.

In 1779, with the gunpowder relocated to Priddy’s Hard, a fort and armaments depot in Gosport, the Tower was gifted to the victualing board of the Royal Navy as a meat store. Latterly in 1823, the Board of Admiralty installed a semaphore tower on the roof and it became the first link in a chain of semaphores signalling between the Royal Dockyard in Portsmouth and the Admiralty in London.