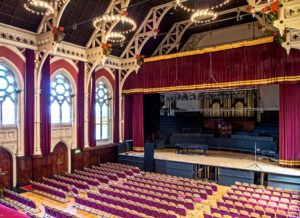 The challenge for Leon Atkins of DTA Consulting Engineers was to design a heating system for the Town Hall’s main hall that would deliver the most ecological and efficient heating, whilst providing comfortable environmental conditions for the people using the facility.

The hall has a large capacity and can hold up to 1420 people. Its variable daily occupancy meant that it was necessary to select a heat emitter that would respond quickly to the changing heating demands.

Their ability to accurately meet variable heating demands as quickly as possible and prevent long heat up period while substantially reducing overshoots in heating requirement, brings about major energy savings, with the added benefit of significantly reduced CO2 and NOx levels.

The new fan convectors were installed into existing wall recess voids, as the building’s listed status meant that the aesthetic appearance of the building could not be altered. On completion the inlet and discharge grilles were the only evidence of the heating emitters’ presence.

During the restoration parts of the building that were previously inaccessible to the public have now been opened up, including the Victorian courtroom, cells and fire station. The carriage driveway with its original glass roof has become the main box office and circulation area.    A new café, bar facilities and community area have also been provided. In addition to the main hall, the refurbished Crypt function room can hold up to 520 people.

‘Middlesbrough Town Hall is one of the region’s most important buildings and the restoration has given it a new lease of life,’ said Councillor Mick Thompson, the Council’s Executive Member for Culture and Communities. ‘It is now fully fit for the 21st century,’ he added.

Over the years the venue has played host to some of the biggest names in entertainment, ranging from David Bowie to Peter Kay and Sir Edward Elgar to Oasis.

Middlesbrough Council’s Project Manager was Michael Canavan, architects were Atkins Global and the main contractors were Kier Construction. The heating installation was carried out by Integral Newcastle.

The project was jointly funded through the Heritage Lottery Fund, the Arts Council and Middlesbrough Council.

The Project Team were delighted with the finished refurbishment of the building, which came in on time and on budget.