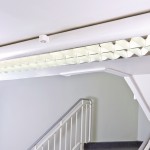 CP Electronics Mini PIRs have been installed to great effect in the impressive Eagle Tower building in Cheltenham. Offering prime location offices in the Montpellier district of the town, the tower is acknowledged to be one of the most prestigious addresses in Cheltenham.

Specified by building services & consultant engineers BME Partnership, whose offices are also in the Tower, CP’s Mini PIRs which are probably the smallest PIR sensors in the world, have been used in the two staircases of the Eagle Tower. BME were approached by Eagle Tower Management to find ways of reducing energy consumption within the 12 storey building and, after surveying the facility, BME became aware that the two sided staircase had very little lighting control on the 71 twin fittings.  To significantly reduce energy as the staircases are not in constant use, BME suggested installing CP’s Mini PIRs. Installation costs were kept to a minimum by adding the PIR sensors to the existing fittings and using Eagle Towers in-house electricians to carry out the work.

CP’s Mini PIR is available in three versions; Basic which provides occupancy sensing in the form of absence and presence detection, Premium with  additional infra-red control, lux sensing and push button adjustment, and Direct Dim offering full dimming control as well using DALI or DSI.  All versions offer a host of energy-saving features whilst providing a simple and cost-effective solution. The Mini PIR also gives a choice of three mounting solutions; integral into the luminaire, side mounted or flush mounted.  The unit comes supplied in two parts, the power supply unit and the sensor head, which is supplied pre-wired with a pluggable connector.

Following the installation at Eagle Tower, BME’s Chris Green commented: “We are very pleased with the installation of CP’s Mini PIR sensors. With 71 fittings running 24 hours a day, 7 days a week,  it was calculated that 98112 KWH’s were being used per year but by installing the Mini PIRs we have reduced power consumption by 85% within the staircase areas alone”.