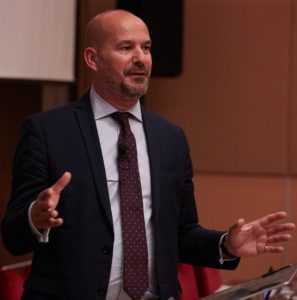 The construction industry faces a combination of challenges unlike anything it has survived before, according to Mark Farmer – the author of last year’s seminal ‘Modernise or Die’ report.

Mr Farmer said the industry was standing on a “burning platform” and urged BESA and its member companies to continue to support his vision of a digital-led future where innovation dictated future skills development in order to avoid total collapse.

He acknowledged the “unique and significant contribution” BESA members play in both the construction and operational phases of a building’s life and the contribution the Association made to his report, where it championed the role played by the m&e professions.

“This is not the same old, same old,” he told the conference at London’s Park Plaza Riverbank Hotel. “Construction has risen to serious challenges in the past, but we are now facing a set of problems that we haven’t seen before.”

He outlined three key areas for change – each of which aligned strongly with BESA’s submissions earlier this year to the government on reform of its Industrial Strategy:

“The industry has an ageing workforce and large parts of it rely on a migrant workforce from the EU,” said Mr Farmer. “We are failing to attract enough people in the 16-24 age group – so we have a growing capacity gap likely to be made worse by Brexit.”

He pointed to a series of sub-standard new housing projects and major quality failures like the Edinburgh schools calamity that had stirred up consumer discontent. He said the Grenfell Tower disaster would also “shine a light on the systemic failings” of the whole design, procurement and construction process – and could prove to be the much-needed catalyst for change.

“We are still delivering projects that are 95% complete with some snagging… more people are now saying ‘that’s not good enough’,” said Mr Farmer.

He called for the sector to move to new digital models involving off-site manufacturing, with more standardisation and where delivery was not so labour intensive. This would reduce the number of interfaces between project teams, each of which increased the risk of mistakes and conflict. “We work in silos, which create inefficiencies,” he said.

Mr Farmer believes that Building Information Modelling (BIM) can play an important role as part of digital transformation. However, he said that the people developing it are currently “just talking to each other…it is not hard-wired into the reality of the industry” and the same goes for collaboration, with both regarded in some quarters as “the end and not the means”.

“It will not work if we procure digitally, but continue to construct in an analogue way,” he told the BESA conference.