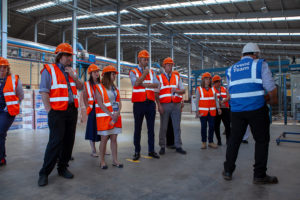 Abtec Building Technologies (Abtec BT) has recently completed a project to install a connected lighting system at a newly constructed brick factory in the East Midlands. Ibstock Brick, an Ibstock PLC company, has built a new factory capable of producing 100 million bricks a year, helping to address the UK’s housing shortage. With lighting such a fundamental part of any manufacturing facility, the company wanted to install the latest technologies to help save on costs, energy consumption and CO2 emissions.

Ibstock Brick is the UK’s market leader in brick manufacture with 20 factories across the country and a total annual capacity in excess of 750 million bricks. In addition, the firm employs almost 1400 people, with a substantial number in the local Ibstock and Ellistown areas in Leicestershire.

Despite the impressive output figures, the UK as a whole is suffering from a housing shortage that is not helped by a lack of bricks. To address the shortfall, it is estimated that a further 400 million bricks will be required annually; a demand that is currently met by imports from continental Europe.

In response, Ibstock Brick is increasing its output by constructing one of the most modern brick factories in the world. In fact, the company estimates that the new £54 million facility will increase its production capacity by a further 100 million bricks per annum.

All modern factories call for connectivity, and this includes services such as lighting, for which the company was keen to ensure the latest technologies were utilised.

“We were introduced to the project by Siemens as we are a solutions partner for their building technologies division,” explains Dave Watkins, director of Abtec BT, a specialist in bringing cost-saving intelligence to buildings. “After an initial chat with Ibstock, at which we had the opportunity to put forward our ideas, we were asked to tender formally for the project, which we duly won.”

The solution proposed by Abtec BT was based on a number of class-leading technologies, including LED sources, open platform functionality, sustainability and, of course, connectivity. This proposal contrasted notably to the original brief, which was based on fluorescent lighting.

“We had to justify the technology and why Ibstock should go for it,” states Mr Watkins. “However, the advantages of the proposal were pretty apparent and the company soon placed the order.” 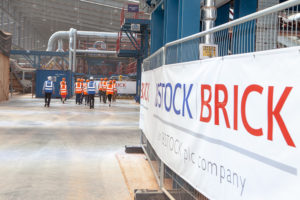 Abtec BT’s alternative to traditional lighting and controls facilitated the potential to build an energy-efficient building management system. Significant payback on the proposed solution was demonstrated, along with CO2 savings to match.

In terms of the actual choice of lighting, the nature of the environment within the factory made this task especially challenging. Specialist conditions meant that the system not only had to be energy efficient, but had to be installed to a very specific standard, a factor that called for careful thought in the design of the concept, as well as consideration for future maintenance requirements.

“We proposed DALi light fittings, which were rated to a high IP (ingress protection) with no metal exposed,” explains Mr Watkins. “This is important as a combination of brick dust and moisture in the atmosphere can cause incorrectly specified light fittings to corrode. In addition to their suitability for the operating environment, the use of DALi lighting would also provide the control and feedback needed at the management graphics end of the system.”

In total, Abtec BT calculated the need for 300 light fittings above the 295 x 86m factory floor in order to maintain the necessary lux levels. Contamination from the brickmaking process will of course affect lux levels over time, but the nature of the connected lighting solution proposed by Abtec BT means it is possible to account for this eventuality.

“At installation, new lights can be dimmed to counter the fact that they will probably emit lux levels that are too high,” says Mr Watkins. “However, as time passes and the lights get contaminated from factory production processes, so we can dim up accordingly. Having a high understanding of issues such as these helped us to secure the Ibstock contract.”

The installation undertaken by Abtec of the electrical elements such as the busbar also had to be carefully selected and installed. Due to the challenging height of the building (over 17m), the sensors used and the location required close scrutiny. 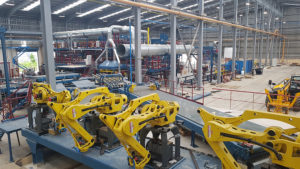 Abtec BT’s system has all the elements necessary to provide effective energy management, including presence detection from sensors mounted throughout the factory, automated function and duration testing of emergency lighting, constant daylight control and some scene setting.

“Constant light control means that we monitor natural light levels across the whole factory and adjust the DALi lighting accordingly,” says Mr Watkins. “For instance, if the sun comes out and natural light levels improve we can slowly dim the lights [not noticeable by the naked eye], thus generating savings.”

In total, energy savings of around 50% are anticipated in comparison with a traditional lighting install, along with an annual CO2 reduction of 170,041 kg. When coupled with the automated emergency testing, further savings are expected, leading to an estimated project payback of less than two years.

“The system installed is open in its approach to technology; KNX has been used for the field based sensors, BACnet for integration to heating and ventilation, and MODBUS to bring in the metering data,” explains Mr Watkins.

Importantly, the entire system links to Abtec’s integrated building energy management system, HYDRA, which allows users to easily navigate and visualise logged events. Built on the latest vector graphics platform (HTML5), HYDRA helps users zoom in to the information they need, whether on a PC, laptop, tablet or smartphone.

The HYDRA system, with its supervisor control and data acquisition functions, is a window into the heart of a building, as well as a proactive tool giving information to managers so they can make informed business decisions.

In the next phase of the project at Ibstock, the Abtec-designed system will link to further services such as heating, cooling and process water, making it an exemplar of intelligent building management.

“When finished, our sister company Abtec Network Systems will continue acting as a bureau moving forward, in effect offering lighting as a service,” concludes Mr Watkins.

The connected lighting project at Ibstock was bestowed with a Highly Commended accolade by the Electrical Contractors Association (ECA) at its recent annual awards.