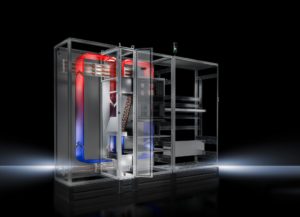 Over the last few years, Rittal’s LCP Rack Industry system has proved highly effective in its ability to cool power electronics in switchgear.

Rittal has now developed a new generation of these air/water heat exchangers with numerous improvements and advantages, aimed at improving its performance for control and switchgear manufacturers, as well as users of the machinery and equipment.

Rittal’s Liquid Cooling Package (LCP) Rack Industry is a system which has proved highly effective at providing climate control for whole suites of enclosures. If an air/water heat exchanger is installed in the centre of a bayed enclosure suite, then the resultant cooling air can be blown towards both sides in the enclosure. Cooling outputs of up to 10kW means that even the most demanding climate control requirements can be met, such as those of cooling frequency converters.

“It means that we are meeting the requirements of our customers, who want to use LCP cooling systems in bayed enclosures, along with continuous busbar systems”, says Christian Westwood, Rittal’s Climate Control Product Manager.

There is space for introducing the busbar system at the top of the climate control enclosure while, below that, there is room for the N/PE rails. Additional cabling can be added-in in both positions, which makes the LCP Rack Industry extremely flexible. All this delivers high performance cooling, notably in large switchgear units with full-length busbar systems.

Placing an enclosure on both sides of the heat exchanger enclosure doubles the impact of the system, enabling the cooling of two enclosures.

Quiet, Energy-Saving and UL Listed
The energy efficiency of the new LCP Rack Industry is also now significantly higher.  The improved system uses EC fans that consume roughly half as much energy as the previous model, to reduce running costs. In addition, the fan’s optional speed control means that the noise level can be reduced in sensitive areas.

The new LCP Rack Industry already has UL Listing, which means it can be used in the USA without any problems.

Zumtobel provide the light for BDP