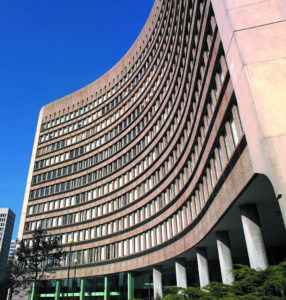 Under Floor Air Conditioning has proved to be a flexible and modular approach for a phased refurbishment running over a twelve year period.  The iconic Tricorn House building; constructed in the 1970’s and situated on the Hagley Road in Birmingham dominates the local skyline and features a highly unusual floor plate.

Floor based air conditioning was originally specified in 2004 for the 8th floor by project Consulting Engineers Andrew Wilkes Management as an option that would bring cooling to the inner areas of each deep space floor area; whilst maximising headroom in the building with a restrictive 2.8m slab to underside slab height. AET Flexible Space has continued to work with developers Commercial Estates Group over twelve years to provide low energy air conditioning and a thermally comforting solution to the multi-tenanted, twelve storey building with 150,000 sq. ft. of lettable space.

The AET Flexible Space system utilises the plenum as the ventilation duct, eliminating the need for ceiling based duct work, making it easy and economical to adapt to changes in the workplace.  The conditioned air is introduced into the space via floor recessed fan terminal units; or Fantiles, which are easily relocated with the 600 x 600mm, raised floor tiles and also feature integrated controllers allowing users to personally adjust temperature and fan speed settings.

Switching from the redundant perimeter fan coil system to plenum air conditioning significantly increased headroom in the height restricted building.  By eliminating ceiling based services, the ceiling void was reduced from 600mm to approximately 80mm resulting in a net saving of approximately 450mm. BCO recommended floor to ceiling height levels of 2.5m were therefore achievable; fundamental for letting agents and investors who seek to offer the highest quality space.

Another key feature of the system specified for Tricorn House is the addition of fresh air modules, which introduce untreated fresh air at floor level of each of the three wings.  The CAM downflow units are therefore handling the heating and cooling of the fresh air in winter and summer, as well as normal solar and internal space loads, thereby reducing plant space riser and maintenance requirements.

The phased project continued over subsequent years, each floor being refurbished as tenant leases expired.  AET Flexible Space equipment has proved to be ideal for this application, easily accommodating new fit out requirements as new tenants secured office space.  In 2014, the 5th, 7th Floor and the 9th Floor were completed in addition to fit out supply for the 9th and 10th floors.  The latest specification included the latest slimline fan terminal units incorporating EC Fan technology which are easily accommodated within the shallow 175mm floor void.  In 2016, the remaining two floors (3rd and 4th) are about to be commissioned.