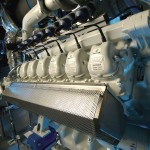 Using either carbon neutral bio-fuels or natural gas, a CHP plant captures and reuses the heat that other energy generators waste, employing it either directly as heating or, through absorption chilling, cold air that can also be applied to the delivery of building services, making this technology an extremely practical option for engineers.

Traditionally used on large manufacturing plants where there is a clear need for plentiful and uninterrupted electricity that is not reliant on the instabilities of the national grid, as well as a continuous supply of heat, CHP has been recognised for its benefits to industry for some years. However, with the continuing instability of the energy markets and ever increasing environmental legislation, other sectors are waking up to the benefits of combined heat and power that is produced onsite, over grid-fed forms of energy procurement.

Broadly speaking, CHP technology is twice as efficient at producing electricity as conventional power generation. This is mainly because of the utilisation of the heat normally lost during generation and losses of energy during transmission over the grid. Comparatively, an onsite CHP plant is thermally more efficient, representing 80-85% efficiency over standard grid-fed electricity generation with an efficiency of 40%. Equally, because a CHP plant is located on the end user’s site, or very nearby in the case of campus sites or district heating schemes for example, the loads on existing transmission systems can be reduced. This in turn reduces the need for expensive system upgrades or the installation of completely new transmission lines.

Now advances in CHP technology mean that less traditional forms of fuel can be used to generate energy onsite. This means that, as well as its environmental claims based on the efficiency of a system that leaves nothing to waste, Combined Heat and Power is also making headway based on the use of renewable fuels such as biogas created through anaerobic digestion (AD).  These forms of renewable CHP plants can be fuelled by biogas because it is clean, consistent and represents a renewable fuel source. However, a CHP can also operate widely on natural gas, propane, diesel and bio fuel.

The benefits are multiple: power is supplied directly to the site and if commercially viable, excess energy can be exported to the grid providing additional revenue, exemption from the Climate Change Levy (CCL) and, now with bioenergy plants, the incentive of Renewable Obligation Certificates (ROCs) as well, a free carbon neutral fuel source, and of course the addition of heat and, in the case of tri-generation plants, cooling as well.

Diageo, the global drinks manufacturer is pioneering such a bio-energy plant at its new distillery, the largest in Scotland, at Cameronbridge. The facility will for the first time integrate sustainable technologies – including AD and biomass conversion – on a commercial scale. This is believed to be the largest single investment in renewable technology by a non-utility company in the UK and the move is set to reduce Diageo’s annual CO2 emissions on the site by approximately 56,000 tonnes.

The bioenergy facility will generate renewable energy from ‘spent wash’ – a mixture of wheat, malted barley, yeast and water – produced during the distillation process. The spent wash is separated into liquid and dried solids. The liquid is then converted, via anaerobic digestion, into biogas and the dried solids form a biomass fuel source.

Around 90,000 tonnes of co-products, which would have required transport off-site by road, will be turned into bioenergy in the form of electricity and steam for use at the distillery. The facility will also recover almost a third of the site’s water requirements.

The proposed facility will provide 98% of the thermal steam and 80% of electrical power used at the distillery. It is an example of Diageo’s commitment to the environment and the efficient use of energy and water.  Dalkia will construct the facility over the next two years and it will then transfer to Diageo under a finance lease arrangement, while continuing to be managed by Dalkia.

CHP plants, previously powered by fossil fuels as a more efficient on-site method of power generation that relied on the reduced wastage of power by avoiding the loss of some 15% of the energy through grid transportation, have evolved to burn more environmentally viable forms of fuel to the same effect. 1kg of wood produces about 1kw of electricity, with insignificant amounts of this power being lost in transmission. Dalkia is pioneering used wood as a biomass fuel for onsite energy generation. The technology means that landfill is avoided and because the biomass is derived only from processing waste wood, complications associated with green wood supplies are avoided too. Typically a bio-fed CHP would operate with wood fired boilers generating steam, which drives turbines that generate electricity. This can then be distributed across a site via a local electricity network. Because of the co-generation aspect of any CHP, heat in the form of hot water is a welcome by-product in these instances; just as in the case for standard CHP plants too.

Financially the longer-term benefits of this onsite form of energy procurement speak for themselves. However, the consultation of an energy management expert can make the route to design, planning, installation, operation and the ongoing maintenance of a CHP plant a viable option for an organisation that wants to explore a more environmental approach to off-grid energy generation.

The possibilities that arise when biomass energy provision and specialist plant are combined are wide-ranging and beneficial for plant managers. Rather than solely delivering financial savings, improvements in the delivery of site-specific CHP plants can be significant and, with the right energy services partner, can be accompanied by improved energy efficiency and reduced emissions, as well as contributing to an organisation’s CSR objectives.