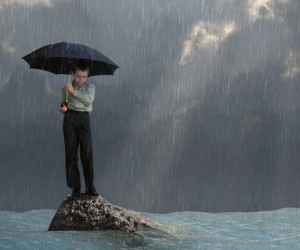 More than 1,400 flood defence projects are to receive funding to protect 300,000 homes, the Treasury has announced. The £2.3bn investment will help prevent £30bn damage in areas including the Thames and Humber Estuaries in the next six years. We look at a coastal defence project that has pioneered the use of BIM in a new field, proving that the technology is worth pursuing in every area of infrastructure design.

It is often thought that building information modelling (BIM) is for buildings. BIM’s advantages are obvious on complex structural projects with building services systerns, convoluted sequencing and endless opportunities for clashes. However, a new project is demonstrating that BIM has a place on coastal projects too. where clashes are not as frequent. Clacton and Holland-on-Sea Sea Defences is believed to be the UK’s first coastal defence scheme to be designed using BIM.

“We wanted to bring BIM into coastal defences for some time, but we were waiting for the right project,” says Mott MacDonald project director Peter Phipps. This £36m project comprises 23 new rock fishtail groynes and 950,000m³ of beach recharge, which will replace failing timber and concrete groynes, fronting existing sea walls and revetments, and will mitigate the erosion risk to over 3000 properties over 100 years.

By using Civil 3D to design the groynes, the project team gained a greater understanding than ever before of how the new structures would interact with the existing environment. A bathymetric survey and a conventional topographical survey provided data for modelling the foreshore and sea bed. The groynes were modelled within this setting, and a new surface was added to represent the new recharge layer.

Each groyne must be sufficiently embedded into the London Clay to prevent failure, and the shorter head of each groyne must be precisely orientated according to the angle of the coastline. In practice, this means many small-but-significant variations in angle, dimension and slope gradient which would be slow and costly to engineer by traditional methods – which was painless with BIM.

“Civil 3D allows us to work with complex trigonometry and geometry, so rather than standardising the groynes across the scheme we have a design that is more bespoke and controlled,” says lead designer David Collery. However, the team faced hurdles as they applied BIM to an uncharted field of engineering design. “Civil 3D was not intended for this infrastructure type, so we were pushing the limits of what it could do,” says our project manager Victoria Tonks.

“We recognised early on that we would struggle with our internal angles,” says Collery. “We had to configure the model carefully to deal with unique geometry and surfaces.”

Despite the learning curve, Collery says that easy access to complex yet accurate data has made BIM well worth while saving 30% on design time and costs. “Our main gain has been a new level of confidence in the interaction between our structures and the foreshore. We can take off highly accurate volumes tailored to each individual groyne. That minimises materials waste, so we bring down construction material variation risk and the environmental impact.”

Further environmental gains will be realised through the reuse of materials from the existing coastal defences.

“BIM will become standard on future large coastal schemes,” says Tonks. “But it’s up to us to flag the benefits to customers.”