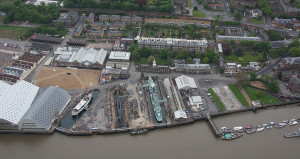 Chatham Historic Dockyard Trust, the charity responsible for the stewardship of the Historic Dockyard in Chatham, Kent, has installed five Remeha boilers in three of its historic buildings during refurbishment works.

The Historic Dockyard is a site of national heritage importance. From Tudor times to the 20th century, Chatham Dockyard played a vital role in supporting the Royal Navy, building, repairing and manning ships such as HMS Victory, Nelson’s famous flagship at the Battle of Trafalgar, to secure and maintain Britain’s command of the world’s ocean and the global position it has today.

Chatham Historic Dockyard Trust identified the need to refurbish and upgrade the heating provision in the Sail & Colour Loft, Royal Dockyard Church and the Admiral’s Offices.

Working in association with PCS Consulting Services, the Trust has replaced its failing boilers with Remeha high efficiency condensing boilers. As the buildings at the Historic Dockyard have been well maintained over the years, the Trust requested connecting the new boilers to the original pipework and radiators. Dirt and air separators were used to protect the new equipment.

The first project was at the Sail & Colour Loft, one of the Historic Dockyard’s earliest surviving buildings. A scheduled ancient monument, this Grade I listed building was originally used to make and repair the sails of ships built and repaired at Chatham. The sails for HMS Victory were almost certainly made here – as were the flags flown to send Nelson’s famous signal at the Trafalgar: ‘England Expects Every Man to Do His Duty’.

The two main considerations for the Trust were to upgrade and replace the ageing boilers as part of its conversion into new higher-education learning facilities for use by the University of Kent, and to improve the overall efficiency of the heating to reduce future running costs. PCS Consulting Services specified two Remeha Quinta Pro 115 condensing boilers operating in a cascade configuration to meet the Trust’s requirement for high performance, energy saving heating.

Adam Rawlinson, Chartered Engineer at PCS Consulting Services, said: “The Remeha Quinta Pro boilers are extremely compact, so this gave us more flexibility and options in terms of plant room design. In addition, as the cascade is prefabricated and preconfigured off site, the contractors, Amdell Mechanical, were able to install it quickly and easily, which helped reduce labour costs and keep any disruption on site to a minimum.”

The second refurbishment project was at the Royal Dockyard Church, formerly the naval church at Chatham Dockyard and today a large lecture and conference centre occupied by the University of Kent, seating up to 400 people. PCS Consulting Services recommended replacing the inadequate existing boiler provision with a Remeha Gas 210 Eco Pro high efficiency condensing boiler due to the reliability of the product and its compact dimensions. Installed by contractor Norton Mechanical, the Remeha boiler was connected onto the existing pipework, occupying only a fraction of the space of the original boiler.

Mr Rawlinson said: “The Remeha Gas 210 Eco Pro boiler has a very small footprint which meant it fitted nicely into the plant room, allowing plenty of space to be made available to accommodate a further boiler if needed in the future, as requested by the Trust. This boiler model also has internal controls which helps it closely match the system demand at all times. This maximises thermal efficiency, helping lower operating cost savings for the Trust.”

The third plant room requiring refurbishment was at the Admiral’s Offices. Originally constructed for naval purposes, an early office concept designed around a central spine layout is now home to a number of businesses. Contractor Norton Mechanical removed the existing, failing boiler and installed two Remeha Gas 210 Eco Pro boilers in its place, connecting to a new low loss header, a dirt and air separator, and onto the existing pipework.

Mr Rawlinson again: “The internal controls and internal weather compensation curve feature on the Remeha Gas 210 Eco Pro boilers proved really useful in this project, allowing the two boilers to make full use of their fully modulating features and sharing the duty between them so that the boilers run efficiently and reliably at all times, increasing their lifespan.”

Chatham Historic Dockyard Trust said: “We are very pleased with the installation of all Remeha boilers and associated equipment providing a cost-effective, efficient solution to some complex heritage challenges, the solution of which will ensure the long-term occupation of three of the Trust’s most important Scheduled Ancient Monuments, now in long-term 21st century uses.”