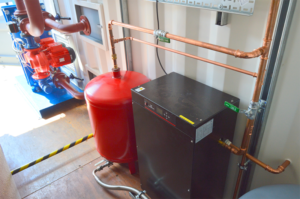 Steam and hot water boiler specialist, CFB Boilers, has recently built two commercial containerised hot water boiler plant rooms for Multifilm SFX Ltd, a leading provider of special effects to the film industry. The boilers, which were shipped all the way from CFB Boilers’ manufacturing facility in Essex to the film set in Hungary, are being used to heat water in large tanks where actors play out aqua-based scenes. They have already been used in a number of major Hollywood blockbusters, including the 6th instalment of a 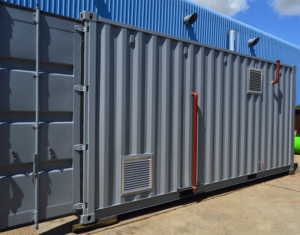 science-fiction film about a cyborg assassin from the future, which is due for release in autumn 2019.

Multifilm SFX has decades of experience in delivering all types of mechanical, physical, aqua and pyrotechnic special effects for the entertainment industry. Scenes filmed in water create a special challenge for Multifilm SFX. For seascapes, large water tanks are used to capture the essence of being in open water, and often feature wave machines. Of course, for reasons of health and safety, the water has to be maintained at a reasonable temperature for the actors.

In 2017, Multifilm SFX wanted to invest in a heating unit that was reliable, transportable and manufactured to high standards. Having previously purchased a steam boiler from CFB Boilers, which the company uses to create effects such as railway station scenes or steam rising from the New York metro, Multifilm SFX knew exactly where to turn. 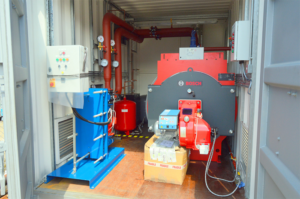 “The steam boiler has performed exceptionally well so I decided go back to CFB for the hot water boiler, despite the logistical challenge of transporting such a large unit between the UK and our location in Hungary,” explains Gábor Kiszelly, Multifilm SFX’s Special Effects Supervisor (who has over 100 film credits on IMBD).

The company selected a 1000 kW high-efficiency hot water boiler to be supplied in a containerised plant room. As with all tailor-made containerised plant rooms from CFB Boilers, the boiler and ancillaries were mounted on a steel chequer floor plate to provide a complete solution; only external connections were required before it was ready to use.

“CFB Boilers have been excellent from the outset,” says Mr Giszelly. “I could easily have used a boiler specialist here in Hungary, which logistically would have been much easier, but I have no regrets going to the UK. We’ve had good service from CFB Boilers despite the distance between us – the delivery of the unit was first class. They even helped get a local resource in place for support purposes.” 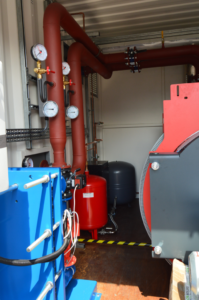 Since arriving last year, the boiler has performed excellently, with no issues. So, when Multifilm SFX recently decided it needed another heating unit, the company ordered an almost identical, second containerised boiler from CFB Boilers.

“If filming takes place at the end of autumn, or the beginning of spring, for example – no shooting is done in winter as temperatures are almost constantly below zero in Hungary – one boiler is not sufficient to heat the water,” explains Mr Kiszelly. “As a result, and because the first hot water boiler has been so reliable, we ordered another unit from CFB Boilers. This has now arrived and gives us complete flexibility to fit in with demanding film schedules.”

The containerised boilers from CFB Boilers have already been put to use on a number of big-budget productions currently being filmed.