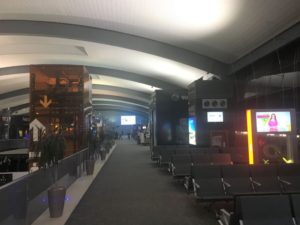 Monterrey International Airport is one of the fastest growing airports in Mexico, handling over 9 million passengers each year.  Monterrey is the capital of the north-eastern state of Nuevo Leon and the third largest city in Mexico and is the country’s leading industrial centre.  The airport has three passenger terminals as well as cargo facilities.

Terminal “B” features vaulted ceilings that have been up lit by Ceres LED luminaires from Luceco. 200W and 100W fittings were mounted on podiums throughout the departure gates and concourse providing the primary lighting source for this high traffic area and enhancing the overall lit environment and passenger experience.

With 300 daily flights to more than 35 destinations and 70% increase in passenger traffic over the last six years throughout the airport, improving light levels with cost effectiveness and energy efficiency in mind was crucial to the efficient running of the departure gates and concourse in Terminal “B”.  Ceres from Luceco has proved to be a flying success.