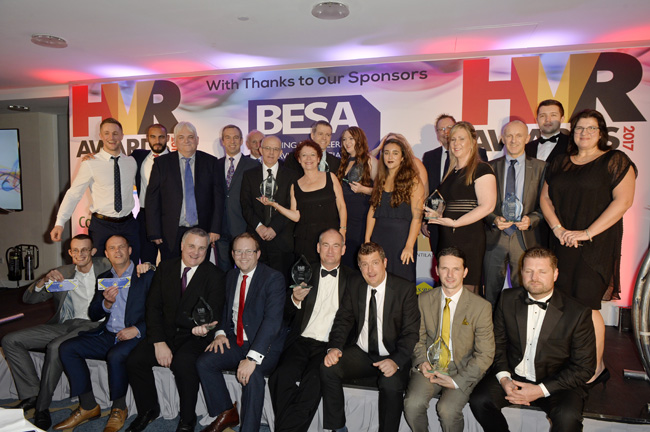 Excellence within the heating and ventilating industry has been celebrated at the eighth annual HVR Awards, held in London, when a host of companies and individuals took the honours.

Tim Hopkinson, President of lead sponsor, Building Engineering Services Association (BESA), spoke about the importance of the event during the current period of political uncertainty. He said: “It is a reflection of this industry’s resilience that we are able to come together every year to celebrate success and showcase what makes us special – as such, we should be thankful to HVR for continuing to deliver these prestigious awards.

“While the political situation remains uncertain and the economy volatile, it is essential that we remain resolute and that our sector continues to build for the future.”

After additional speeches from SkillFRIDGE competition manager Mark Forsyth and director of Toshiba Air Conditioning, David Dunn, on the importance of training young apprentices, HVR Magazine Editor, Heather Ramsden, said: “This industry never lacks in imagination. Instead it always amazes me how much we can do to find new ways to progress and innovate.”

Vent-Axia – Commercial/Industrial Ventilation Product of the Year, for Pure Air, which was praised for addressing indoor air quality issues and demonstrating great foresight and commitment to public health.

Viessmann – Commercial/Industrial Heating Product of the Year, for its Vitocrossal 100 boiler. The judges noted that the innovative product incorporated detailed design features that put it ahead of the game.

Toshiba – Commercial/Industrial Air Conditioning Product of the Year, for its three pipe SHRM-e Heat Recovery VRF system, which was applauded for being more flexible, energy efficient and kinder to the environment.

With sustainability being a key issue within the industry, this year’s Sustainable Product of the Year and Sustainable Project of the Year categories were hotly contested. The Awards were presented to Ziehl-Abegg UK Ltd for its ZAbluefin fan and Finn Geotherm for its Flagship Group/Orchard Close project, respectively.

The final Award to be presented from the ‘judged’ categories was Contractor of the Year, was won by A1 Flues after an impressive 12 months which point to an even brighter future for the company.

The final three categories to be presented reflected the opinions of the industry itself, with the winners being decided solely by an industry vote.

Brymec scooped the Wholesaler/Distributor of the Year award, and Paul Wightman of Albion Valves (UK) was named Customer Service Person of the Year. The Trainee of the Year was Lewis Buchanan, an apprentice with Hargreaves Ductwork Ltd.

The prestigious Lifetime Achievement Award was presented to Tom Dee for his impressive commitment to the industry since he began as an engineering apprentice in 1965.

Tom has been involved with the development of warm air standards in the UK and Europe, representing UK manufacturers at a number of committees and working closely with government on the development of Building Regulations and the adoption of European product legislation into the UK, to name but a few.

The awards were organised by Datateam Business Media Ltd, publishers of HVR magazine.

For the full list of this year’s winners and highly commended, and for more information on the HVR Awards, visit www.hvrawards.com

ACE’s Chair and Vice-Chair to continue in 2021