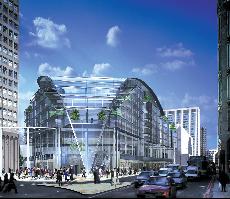 Simmtronic SPECS3 fully addressable digital lighting controls were chosen for Land Securities’ impressive 550,000 sq ft office development, built by Sir Robert McAlpine at Cardinal Place in London. The lighting control system for the full Cat A fit out of this office complex, which extends over three buildings, has been completed and commissioned. Simmtronic is now engaged in enhancing the backbone system with features and functions to provide each new incoming tenant with a customised lighting control scheme.

For the shell scheme, Simmtronic worked closely with consultants Faber Maunsell and the two electrical contractors T. Clarke Plc (on 1a and 1b Victoria St) and Briggs & Forrester (on 16 Palace Street). It provided fully addressable modules with multi-gang plates at doorways for zonal switching, and photocells have been employed by windows to turn off perimeter lights in response to daylight penetration. The lighting control system also extended to the buildings’ core areas, including toilets, stairs, lobbies, plant rooms, car parks and the external lighting.

A fully addressable emergency test system is incorporated into the lighting controls, enabling every emergency luminaire to be monitored. Time scheduling is programmable using the on-site lighting management computer and software supplied by Simmtronic.

Simmtronic is currently involved in three major Cat B lighting control fit-outs at the development. It is providing optimised schemes for new tenants incorporating scene-setting, dimming, presence detection, AV interfaces and partition-link functions. There is also extensive cold cathode in some areas for which specialised controls are being provided.