Cable manufacturers will be left out in the cold without CE marking, says BRE Global

Manufacturers risk losing out on trade opportunities with Europe without appropriate CE marking for their cable products, says BRE Global, the UK leader in fire, security and environmental testing and certification of construction products.

The warning comes with just months to go to the 1st July 2017 deadline when CE marking becomes mandatory for power, control and communication cables placed on the European market.

“Despite market uncertainty following BREXIT, CE marking will remain a prerequisite for any
manufacturer, importer and/or distributor wishing to sell their cable within the European Union,” says Damien Ward, senior cable certification manager at BRE Global.

The company is a long-serving notified body for the testing and certification of a wide portfolio of
construction products and systems and is well versed with the requirements of the Construction
Products Regulation (CPR).

With the publication of EN 50575, the EU’s harmonised product standard for power, control and
communication cables for permanent use in buildings, manufacturers entered a window of
transition to comply with regulation. But despite a deadline extension from December 2016 to July 2017, some manufacturers are still holding back, either daunted by the process or hesitant in the current state of uncertainty following the UK’s BREXIT vote.

“Once EN 50575 was officially cited, many cable manufacturers were quick off the mark to submit their products,” says Mr Ward whose cables team has successfully tested and classified a wide range of products.

“But time is ticking for anyone who has not yet acted, especially those with extensive ranges or
going for the higher performance classes which, though more involved, will maximise trading
opportunities.”

CE marking for cable products involves a number of important steps. Classification Fca can be self-declared by the manufacturer while classifications Dca & Eca require testing by a notified test laboratory. But Aca, Bca and Cca follow a more complex certification process which must be undertaken by a notified certification body such as BRE Global.

This process mainly involves testing to two fire performance standards, EN 50399 and EN 60332-1-2, followed by classification to EN 13501-6 based on the outcome of the tests.

The EN 50575 standard also includes the use of new extended field of application (EXAP) rules that allow for the testing of a family of products to be classified to a certain fire property without testing all of the individual members of the family.

The safety testing requirement for cable CE marking is exclusively focused on fire performance. With an unparalleled reputation and resources in fire testing, research and investigation, BRE Global says that clients can be fully confident of the integrity of its cable testing and CE marking services. 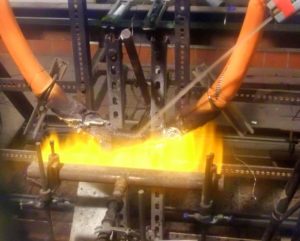 Mr Ward continues: “BRE Global has pre-eminent expertise in fire performance testing and a trusted reputation in product certification to regulatory standards, being a UKAS accredited laboratory for testing and a notified body for many types of construction products under the CPR.

“We can assure our clients of a complete and efficient international service, including factory visits and inspections where the cable classification demands.”

He adds that clients need to think carefully about the markets and applications they want to target when deciding on the CE marking classifications for their products. EU countries are free to stipulate which cable classifications they require in their national building regulations, he points out. While the Eca and Fca classes involve the lowest cost and effort, they may not deliver the best return long-term.

“Not all EU countries have yet decided on which CE marking classifications they will accept for different applications,” says Mr Ward. “But this should not deter manufacturers from getting under way with their CE marking programmes as this will be a mandatory legal requirement when placing cables onto the market within the EU from July 2017.”

Mr Ward adds: “The sooner manufacturers start the process, the sooner they will be able to capitalise on their CE marking in Europe.”