The need for strong partnerships and close working relationships between government, national agencies and local bodies was the overriding theme during the 80th ADA (Association of Drainage Authorities) Conference, this month.

During this special anniversary year, it was also a poignant day, as Henry Cator DL OBE stepped down as chair of ADA after 10 years. He handed the chairmanship to Robert Caudwell following his formal approval during the AGM, immediately following the conference.

Mr Cator was also concerned in a lack of investment, particularly as some 60 per cent of grade one agricultural land falls within districts managed by internal drainage boards. He also commented that there appeared no long-term strategy in place for future planning of sustainable drainage systems (SuDS), stating this was not acceptable.

He finished by stressing the need to work together with Government and create strong partnerships to plan for the future.

Mr Caudwell, also a farmer of some 350ha of arable and horticultural land north of Boston in Lincolnshire, echoed Mr Cator’s view, saying: “I passionately believe in partnerships, and the message to all is we will work with you, if you work with us.

“But we must work as equal partners, and that means ADA, IDBs, local authorities, Government, the Environment Agency and national agencies working on an equal footing. Partnerships take a lot of work and trust, but you can deliver more.”

He concluded, “Every solution requires a partnership approach at all levels. It must be the norm. There will be difficulties, but we must work as partners.”

Thérèse Coffey MP announced the publication of new statutory guidance on the designation of ‘main river’. This guidance sets out the basis on which the Environment Agency should decide whether or not a river or watercourse is treated as a ‘main river’. These are usually larger rivers and streams, designated as such for the Environment Agency to manage. The guidance was published as part of the progression of de-maining pilots that were launched earlier this year.

Dr Coffey also said she was keen to reduce the administrative burdens, claiming this will make environmental protection easier. She also said Government was keen to work together on SuDS, before describing IDBs as the ‘unsung heroes’ of drainage, water level and flood risk management. 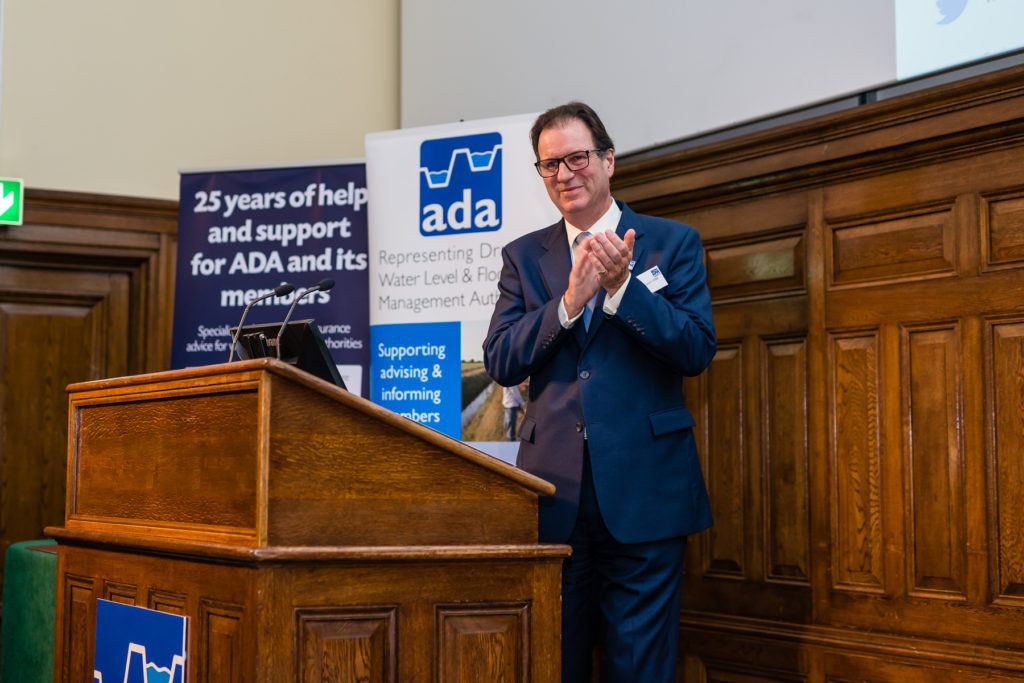 Pictured: Henry Cator DL OBE, who has stepped down as chair of the ADA after 10 years.