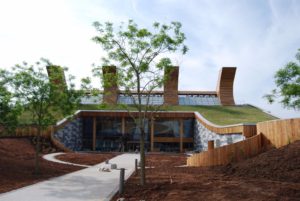 A centre aiming to be the world’s first carbon neutral chemistry lab has been lauded for its integration of subcontractors into successful project delivery.

The University of Nottingham’s £23million GlaxoSmithKline Carbon Neutral Laboratory for Sustainable Chemistry has been designed to achieve a BREEAM ‘outstanding’ rating, and be carbon neutral within 25 years of operation. A key contributor of those targets has been the ventilation, developed by Imtech, in partnership with Gilberts Blackpool. Imtech won a Project of the Year award for its overall involvement in the building services provision*.

“Achievement of the carbon neutral criteria was paramount,” explained Gilberts’ national sales manager Pete Sedgwick. “That even took into account embodied carbon, materials, methods of production and delivery. The original design was revised to help realise the carbon neutral target, with the introduction of a variable air volume system and over-sized ductwork.

“Gilberts undertakes all elements of the design and manufacturing process in-house, at our Blackpool headquarters, so that in itself contributed towards the sustainability element. Internal ventilation grilles had to be selected that would deliver the performance criteria, easily integrate into the structure and arrive on site in a timely manner. Schedules were tight, but we were uniquely positioned to work with Imtech to achieve the over-riding environmental criteria, and give the delivery assurances needed.”

For fresh air into the spaces, predominantly Glberts’ DGA4 louvred diffusers provide four-way blow with a 12degree cooling differential and up to 0.350m3/s through the suspended ceilings, complimented by Gilberts’ GSFA ceiling fixed swirl diffusers, and aluminium NV vision proof transfer grilles moving air through partitions and doors at a maximum 1.5m/s.

Extract of used air is achieved via a combination of Gilberts’ GX steel air valves providing volume flow up to 200l/s, DGA diffusers, and linear bar grilles. All Gilberts’ components were supplied appropriately finished in gloss or satin silver to the preferred RAL.

Founded 55 years ago, Gilberts Blackpool is Britain’s leading independent air movement specialist, and is unique in its ability to develop components- be it ‘mainstream’ or bespoke- entirely in-house, from initial design through tooling, production, testing and supply, at its 85,000 ft2 manufacturing facility. Its state of the art test centre, designed and built in-house, is one of the most technically advanced in the country.