Big Foot Systems has helped Nick Knowles and the BBC DIY SOS team on a rooftop garden project at London’s Great Ormond Street Hospital for children. The company supplied its H Frame supports as part of the project which will provide a much needed sanctuary for children, carers and families at the hospital.

The garden, designed by Chris Beardshaw, had its public debut at RHS Chelsea Flower Show on 23 May 2016 where it received a gold medal. The award winning garden was then moved and adapted by the BBC DIY SOS team so that it could be permanently sited at the hospital. The ambitious project features over 30 mature trees, around 1,000 plants, over 30 tonnes of soil, and took over 70 crane lifts to reach its destination in the centre of the hospital on the roof of the old boiler house.

Big Foot Systems Product Manager, Sam Birch said: “When we were contacted and asked to provide some products for the DIY SOS Great Ormond Street Hospital project, we jumped at the chance to be involved. This is such a worthy cause and one which, as a company, we were more than happy to be involved in. We were also honoured to be invited to the official unveiling of the finished garden which was very impressive.” 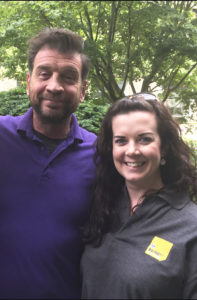